Mimsy, also referred to in-game as Lady Mimsy Alcorn Shallot, is a pre-made, non-playable ghost, residing in Windenburg in The Sims 4: Get Together.

Mimsy is a ghost that haunts the Von Haunt Estate along with her fellow departed husband Bernard.

In the past she was especially fond of botany and gardening. She lived in the estate, prior to her death, with Bernard, in an arranged marriage that then sprouted on love.

She is said to have saved the Von Haunt Estate from bankruptcy due to her large dowry, during a crisis in sausages of 1892. However, she died before having any descendants to share said fortune with, since Bernard, who was an eccentric painter, one day set fire to a watercolor canvas he was displeased with, setting fire to the entire manor, burning Mimsy alive in her sleep.

In the dining room of the mansion, a portrait of Lady Mimsy can be seen, with a description that reads:

"The haunting portrait of Lady Mimsy Alcorn Shallot was painted on the very afternoon before she perished in her sleep from an unfortunate estate fire. The exact cause of the fire is still a mystery. These days, she's much more transparent. Visit The Von Haunt Estate and your Sims might get a chance to meet her... um... in person?"

Additionally, if the player has a Sim look at said painting, a notification will appear that reads the following:

Nowadays, Mimsy can be found in the estate lot, wandering around. Her most common actions include treating her garden, walking through the labyrinth and playing the piano next to the wedding arch in the estate's garden. She is nicknamed "The Green Lady" or "The Ghost Gardener" by locals. She can also appear at the bars during the Ghost Night. 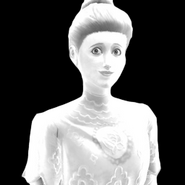 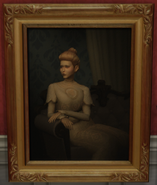 Mimsy in the Gardens of her house.

One of Mimsy's interaction statements.
Add an image to this gallery
Retrieved from "https://sims.fandom.com/wiki/Mimsy?oldid=938026"
Community content is available under CC-BY-SA unless otherwise noted.