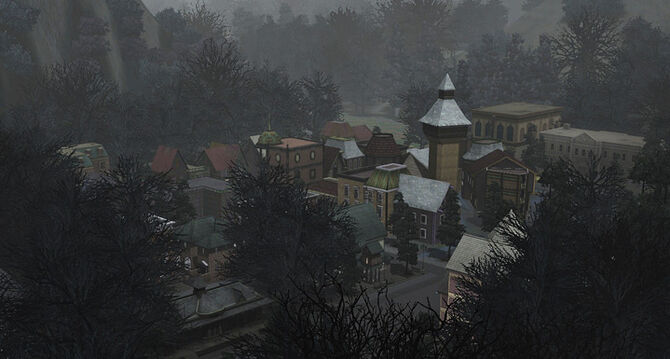 Midnight Hollow
Neighborhood · Featured in:
This world is a new release - please follow these policies when editing.

Midnight Hollow is a The Sims 3 Store world, that was released on September 26th, 2013. It was first announced on September 12th, 2013. This world features darker, spookier themes. It features brand new locations, features, along with new characters.

Find your light in the dark splendor of Midnight Hollow

Explore a landscape where all you're really required to be is yourself. Under the subdued sky of Midnight Hollow, it's the residents who really shine. Eccentric townsfolk have taken a century-old Victorian town and made it a place they can call home. What life will you make in a town where creativity and individuality are at the center of it all?

Will you be the owner of an art gallery bringing culture to the town? Or run a vintage furniture boutique to add class to Sims homes? Or a car showroom showing Sims life in the fast lane? The business opportunities are endless!

It's Rarely Sunny in Midnight Hollow!

Then come to Midnight Hollow where it's good to be one of a kind!

Life is hard and people will always have something to say about you. "All of her husbands die mysteriously and suddenly" or "I think her son was fathered by the Grim Reaper" or "I'm pretty sure she's a murderer" ...Where do they come up with this stuff??

I moved here to get away from the "normal" life to find a life that's normal for me. Let them have their  "Starlight" and "shores," I'll take my century-old Victorian mansion, eerie landscape and interesting neighbors every time.

Here's hoping you're next! - I meant being my new neighbor; not the whole murder thing FYI.

See you at Midnight Hollow!

§4,000
Difficulty: 1
Eliza Ainsley
Eliza lives alone with solitude as her best friend. She doesn't like neighbors or visitors or the outdoors or children. All she likes is reading books and being alone. To be honest, no one in town really knows what Eliza looks like let alone how she's fairing and that's the way she likes it.

§12,000
Difficulty: 1
Phineas Bledsoe
Phineas is at the height of fashion and the height of poetry (if there ever was one). He can tell in an instant if a piece of writing or clothing will be a hit or a gauche rerun to be quickly forgotten by the masses. It's best to get and stay on his good side if you want near the "it" list.

§3,000
Difficulty: 1
Kara Carter
Kara Carter is a leading chef in town with an eccentric sense of fashion. She grabs inspiration where she can find it, whether it's the modern Vivienne Simwood, or Marie Simtoinette of the past. She may be described as "Shabby Chic" but her Goopy Carbonara is to DIE FOR.

§30,000
Difficulty: 5
John Doe, Jane Doe, Joseph Doe, Jennifer Doe, James Doe, Unborn baby Doe
Jane is the perfect housewife, from her neat hairstyle to her fashionable yet conservative dress. She's neat, nurturing, loves her kids, and can make a mean pot roast! Meanwhile, John is rising in the ranks at his corporate job. He feels successful in life and supported by his family. He works hard but comes home in enough time to teach his kids a lesson or two about life and talk to his wife about her day. Nothing mysterious seems to be happening here, but didn't their house used to have a basement?

§5,000
Difficulty: 2
Todd Landgraab, Karl Simon, Seema Sielen
Seema has the charm, Karl has the smarts, and Todd has the money. They're pressured by friends, family, and society to make something of themselves and they have a plan! Entrepreneurship is a real thing...right?

§3,000
Difficulty: 1
Conrad Finley
Conrad was born for the evening news. He has the wit, the brains, and the nose for news. The only things he's lacking in the world is melanin. But he doesn't miss it and he's not letting it hold him back. He'll be the anchor on the evening news in the next 5 years or his name isn't Conrad Finley.

§2,000
Difficulty: 4
Edmund Flynn, Maggie Flynn, Mitchell Flynn, Cora Flynn
When Jackson Bishop received a letter from the Flynn estate lawyer detailing the poor, rich orphans who were coming to live with their long lost Uncle they've never met, he decided this was his chance to improve his standing and become guardians of the children for their fortune. Good old Edmund Flynn passed in a tragic accident and the kids *did* need a guardian after all. He's just being charitable!...right.

§10,000
Difficulty: 1
Lucien Hyde
Lucien is a tortured artist whose only torturer is himself. He enjoys being sad and the better he is, the sadder he gets. It's his thing.

§8,000
Difficulty: 2
Mai Lau, Annie Lau, Lucy Lau
The Lau triplets were the foremost scientists in the field of optimizing the human body to better the earth. After an experiment went awry the women were left with super fit physiques and the need for a new purpose in life. Each sister took on a new career that would employ their newfound physical prowess.

§3,000
Difficulty: 1
Jack Limb
Jack is the resident toy collector. New in Box, Vintage, First Edition, are all phrases in his vocabulary and he keeps his collection pristine. He'd like to go into toy making but lacks the proper skill, so in the meantime he's drafting a daring rescue of his dear love Sarah from the evil Dr. Synapse.

§3,000
Difficulty: 1
Samantha Nguyen
Samantha has a number of tattoos on her body and each one tells a story of something she's loved, places she's been, and where she hopes to be. Also they just look really great on her. Midnight Hollow is just one stop on her grand adventure of bringing affordable medicine to the world and who knows where she's headed next.

§7,000
Difficulty: 1
Trang Pham
Trang is an artistic savant. She paints some of the most brilliant paintings in the world and is renowned for her unqiue avant garde style. It's really too bad that she can't stand art. At all.

§3,000
Difficulty: 1
Julian Poirot
Julian has been a performer all of his life. He shined on the stages of Champs Les Sims and brought wonder and excitement to all those who viewed him. But those watching him didn't know that the light they saw on stage was not talent, but the light actually inside his heart. As time wore on and life got harder his light began to fade and performances became more and more sad. Can love bring Julian's light back? Or will he be the saddest clown?

§3,000
Difficulty: 3
Monty Prince, Clarice Prince, Cornell Evans, Cecelia Evans
Cecilia and Cornell have had enough. Instead of living the life of normal children their mother has forced them into a regimented existence that has stifled their creativity and freedom. Sure they know more skills in their early youth than most Sims would know in a lifetime, but at what cost? They've run away to live with their grandparents hoping to find out who they are and who they want to be before adulthood sets in.

§3,000
Difficulty: 4
Tatiana Salas, Jay Salas, Sandra Salas, Frieda Salas, Unborn baby Salas
Tatiana couldn't believe her luck at the ghost mixer when the attractive Jay walked her way and asked her name. Now years later she has the home she always dreamed of and the family she thought she'd missed out on. Science doesn't explain how it works, but she thinks their family is powered by Love.

§10,000
Difficulty: 3
Hyun-Moon Jun, Jin Sang Kim, Young Jae Sung, Nadia Cho
Nadia had a hard time convincing her bandmates that she should be taken seriously as the lead vocalist in their band, but one metal growl during an argument and they were sold. Don't let her size fool you, this girl can rock.

§3,000
Difficulty: 1
Katarina Stewart
Katarina's love for dolls came at a young age. She adored all of the fashion and possibilities. As she aged, her only dream was to be like her beloved doll. Now with pristine skin and an almost expressionless face she loves everything she sees in the mirror and doesn't want to be alone. She has her eyes set on collector Jack Limb because if anyone can appreciate perfect upkeep of a doll, it's him; but his feelings for that perfect Sarah Holden are standing in her way.

§10,000
Difficulty: 2
Roderick Synapse, Sarah Holden
Dr. Synapse never meant to be an evil scientist. He loved science, he just didn't love Love. It was far too complicated. So he did what any scientist would do. He kidnapped the sweetest girl in his former town to dissect her brain and figure out just how Love works. You know, For Science!

§20,000
Difficulty: 2
Marina Rosa Vasquez, Fausto Alvarado Vasquez
Fausto has always been known for his good looks and his charming personality and he rode on those traits for most of his life. Now as he sees his youth fading and realizes he has no real talent or experience to speak of, he realizes he needs a new plan. He can love someone significantly older than him right? Or at least pretend to for awhile?

§700
Difficulty: 1
Nathan Watts
Nathan Watts is leading energy and technology. He's trying his new inventions around town, but his discoveries will revolutionize the way we use energy around the world. How does he get everything done? Sheer organization. He's naturally quite neat but everything has its place and everything needs to be in it or he can't concentrate. Whatever you do, don't start counting in 3's around him, once you start he won't be able to stop.

§30,000
Difficulty: 1
Jules Wheeler
Jules knows that the only way to keep money is by not spending it. An impoverished childhood didn't prepare him for the success that would find him in his later life. Now that he has a small fortune he intends to keep it. No point in wasting money on fancy furnishing or an expensive car. He will only buy the cheapest that money can buy, because he never wants to be poor again.

§6,000
Difficulty: 2
Cedrick Winchester, Odessa Winchester
Odessa and Cedrick come from a long line of blue-blooded royals but had their throne usurped when the townsfolk felt that they were a bit too crazy to be rulers. They've found a town where they feel comfortable and they're trying their hand at Politics. Royalty here, Royalty there, what does it matter when you're royalty?

§3,000
Difficulty: 2
Viola Yates, Morgan Yates
Morgan loves his mother. More than anyone or anything. There's nothing creepy about this. They're just best friends and hang out alone together in their large quiet home. Visitors can hear her, and passersby can see her in the window, but no one has ever actually seen her face.

§13,000
Difficulty: 2
David Ziggfield, Alia Ziggfield
David and Alia Ziggfield are all about reinvention, innovation, and striking visual presentation. She's a model turned surgeon and his current style is a glam rock flamboyant androgynous alter ego out to change the world.

§3,000
Difficulty: 3
Olive Specter, Nervous Subject
Olive has had her share of death in her life with every romantic relationship she had ending in a sudden and untimely death. Furious at Death, she decided to track him down to give him a piece of her mind. What she didn't expect was to start a relationship with him! That ended quickly, but she was left with something to remember him by. Now it's just her and her young son, who is quite the Nervous Subject indeed.

Deceased sims are NPC ghosts that are tied to their remains. In MidnightHollow, they are located at the following lots: