Mickey Harlow (né Smith) is a pre-made playable adult Sim from Four Corners, one of the neighborhoods shipped with The Sims Life Stories. He lives in 7 Hyacinth Circle and works as a Party DJ in the Slacker career. Despite his reputation as a ladies' man, he is accually a hopeless romantic. Mickey is one of three neighbors to greet Riley Harlow when she first arrives to the neighborhood. Later, Riley invites him over, not knowing he will bring Agora Tchotchke with him. After Agora gives Riley a hard time about liking Mickey, Riley sends her away, leaving Mickey and Riley alone together. They go on a date to the Starlight Cafe and Market, where they play chess, have dinner, and share their first kiss together. He also asks Riley to be his girlfriend, and she accepts.

A few days later, Riley invites him to Lead's Gym to work out together, and Mickey finds out that Riley has been seeing Dylan Kincaid on the side. Mickey breaks up with Riley on the spot, and starts dating Agora. They almost get married at Old Grove Gardens, but Riley shows up and tells Mickey how Agora and Dylan had kidnapped her aunt Sharon Foss, and planned to split her large inheritance between them. Mickey is furious, and leaves Agora at the altar. After she proceeds to attack Riley for 'ruining everything', she is arrested by the police. Mickey asks Riley to marry him, then and there, and they go on their honeymoon. After they come back, Riley becomes pregnant, and they have a baby or twins.

When Mickey is first played at the end of Riley's story, he is 29 days from being an elder. He has the Romance aspiration and the Aries zodiac sign. Despite serving as the deuteragonist for Riley's story, he only has 3 nice points, and may initiate negative social interactions with Sims that he has a low, neutral, or negative relationship with. Mickey can be found within the game files of the Free Play version of the neighborhood under the name "Mickey Finn". However he can't be played, as his character data has been deleted. 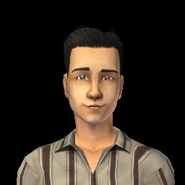 Mickey's head-shot in the Free Play version of the neighborhood.
Add an image to this gallery
Retrieved from "https://sims.fandom.com/wiki/Mickey_Smith?oldid=912600"
Community content is available under CC-BY-SA unless otherwise noted.