Not to be confused with Michael Bachelor (hidden).

Michael Bachelor is a playable character in The Sims and The Sims 3. His family is one of the three famous starter families in The Sims. In The Sims 2, he is the late husband of Dina Caliente and the older brother of the missing Bella Goth. As his last name suggests, he is a bachelor in all but one of the games he appears in.

In The Sims 3, Michael is a teen Sim living with his parents, Jocasta and Simis Bachelor, and his younger sister, Bella. He is dressed in a "jock" style and he has the Schmoozer and Athletic traits. His other two traits are Loves the Outdoors and Friendly. Michael's wishes are mostly about athleticism and improving relationships. His skin is lighter than it was in older Sim games. His eyes are also brown, while in The Sims 2, they are light blue. He can be seen at school and the local gym. His bio states he has lots of friends at school, but it can be assumed that they don't live in Sunset Valley as at the start of the game, his only friend outside of his family is Mortimer Goth. He has a love for the outdoors, so he doesn't mind helping Jocasta in the garden. He has 1 point in the Athletic skill. When the family is first played, Michael is 13 days from being a young adult.

In The Sims, Michael is similar to the character of "The Graduate" as he recently graduated from college and doesn't know what to do with his life. He starts in Neighborhood 1's Family bin. He wears blue jeans, blue and white sneakers and a blue-grey Sim State University shirt. His last name was meant to match his state, which is unmarried and living alone. It should be noted that in this very first game, his relations to Bella Goth are not mentioned and he was treated as a separate character from her family.

It is possible that Michael Bachelor in The Sims was not originally supposed to be related to Bella in the first place, but to be a separate character. Assuming this theory is true, the revelation of Bella's original surname, and her relationship to Michael Bachelor, would later be coined by Maxis for The Sims 2 to explain what had happened to some of Pleasantview's notable built-in characters, as the game was a sequel to the original The Sims game. However, Michael and Bella both use the "Asian" head skins and both have tan skin, so it's possible they were always meant to be related.

Also, his appearance and biography in The Sims suggest a young man in his early twenties, yet the 25 years between the The Sims 3 and The Sims would make him in his late 30s at least. While it's possible for him to have gone to college and graduated later in life, it doesn't really fit with his original portrayal as someone just starting out in life. Even ignoring The Sims 3, there are still plotholes caused by Michael's age: in the original game, Michael should be in his early or mid-20s. Yet by the sequel, set 25 years later, he had died of old age. Based on his age in the original game, this means he died of "old age" at around 50. Even including The Sims 3, he would have died of old age at around 65. Usage of the Elixir of Life either to prolong or shorten his life could explain this. According to SimEnhancer, Michael Bachelor was the third Sim created in Neighborhood 1.

In The Sims 3, he is Bella's older brother. However, in The Sims, when he has just graduated college, Bella is already married with a daughter (and appears to be slightly older than him). This might suggest that he went to community college first and took a while to graduate, whereas Bella did not go to college, married Mortimer, and had Cassandra by the time Michael graduated. There also is the idea that he might have used the Elixir of Life to stay young (while Bella grew older) and was prematurely aged later on, but it is most likely a simple continuity error.

Life leading up to The Sims (Console)[]

In The Sims (console), Michael has black Mohawk hair, black glasses, blue shirt, brown pants and brown sandals. He is in the Family bin alone and without a home. The player must build him one in order to be played. His sister, Bella Goth, lives with her husband Mortimer Goth and daughter Cassandra Goth in 5 Sim Avenue. Yet again, his relation to Bella Goth is not stated and he remains a separate character from her line of the family.

In The Sims 2, Michael is already a deceased elder and is revealed to be Bella Goth's older brother. Before his death, he married Dina Caliente, sister of Nina Caliente. According to Dina's memories, she had her first kiss with Michael when she was a teen, which would not be possible in normal gameplay due to their difference in ages. His urn sits on a coffee table in the Caliente sisters' condo.

When resurrected, Michael recognizes Dina as family, and can perform exclusive interactions such as "family kiss" in addition to romantic interactions. Bella will appear in his relationship panel, but he will be unable to call her. Michael's facial structure is identical to that of the 2nd face template in Create a Sim, except the slightly customized upper lip. But the difference is so small that it normally can only be proven through BodyShop. Oddly, when trying to view his DNA page in SimPE, it will appear blank. This oddity also happens with Michael's sister Bella, and Darleen Dreamer. If the Prints Charming Fingerprint scanner is used in a barely-played Pleasantview, his fingerprints can be found commonly throughout the town.[citation needed] The prints of other dead or missing Sims can also be found, but Michael's are by far the most prevalent, being easily found in every playable house and some of the empty ones. Even though Michael is thin, his fitness level indicates that he is supposed to be fit. His sister Bella also has this case. When resurrected and aged down to another life stage, Michael's hair will be blonde like his mother Jocasta's was before she became an elder.

Michael throughout The Sims games.

The two Michael Bachelors in The Sims 2.

Michael's ghost in The Sims 2. 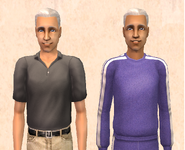 Michael Bachelor's wardrobe in The Sims 3. Notice how he has the same hairstyle as his father, when he's not wearing his sports cap.