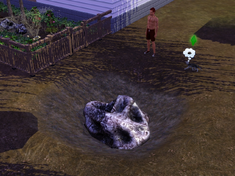 The aftermath of a meteor landing, with a crushed Sim underneath it