The Sims Wiki
Register
Don't have an account?
Sign In
Advertisement
in: Ambitions, The Sims 4, Death
English

Death by meteor is a form of death in The Sims 3: Ambitions and The Sims 4. It is the successor to Death by Satellite which was seen in The Sims 2.

Whenever a Sim is standing in an open area, there is a very small chance a meteor will fall directly on top of them. Whenever a meteor is about to fall on top of a Sim, a large shadow will appear around them and ominous music will play. A message will appear stating that the target Sim is wondering why it suddenly got dark. All Sims on the lot will run outside to look up curiously at the sky, and the meteor can be seen if the camera view is in the right position at the exact moment it falls. Also, if the player zooms out at the right time, the meteor can be seen streaking across the sky. When a meteor hits, a mushroom cloud appears. The player has plenty of time to move the Sim out of harm's way, but if they do nothing the meteor will crush the Sim. Using a telescope outside increases the chances of getting hit by a meteor.[1]

In Seasons, aliens can summon meteors at will, and if they summon them in crowded places such as schools or festivals, the chances of the meteor hitting multiple Sims is very high.

One of the Karma powers on The Sims 3: Xbox 360 and PlayStation 3 includes the ability to conjure firestorm that will "Drop fireballs onto a location to cause destruction and mayhem.". The Pets version in the consoles also includes a few new karma powers, with one called "Meteor Strike" that summons a meteor to fall from the sky and crash onto the lot.

Meteorites can be bought in build mode when using the "bb.showHiddenObjects" cheat for $0. They have the following description when hovered over: "My word, how rude of that Sim to stand in the way of this meteorite's smashing performance! It was going to be so spectacular, and had to settle for a slightly less graceful landing, but nonetheless! It demonstrated a high caliber of professionalism. And not a single bit of applause from the audience, just a bunch of wailing crybabies who couldn't identify high quality performance art if it flew down from the heavens and bonked them on the head!" Most items only able to be bought using this cheat have one or two word descriptions and are often simply named **DEBUG**.

The aftermath of a meteor landing, with a crushed Sim underneath it 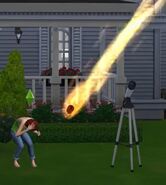 Eliza Pancakes about to be hit by a meteor.

The meteorite's description in build mode.