Listen  /mərˈkjuːʃioʊ ˈmɒnti/) is a pre-made teenage Sim, living in Veronaville, one of the neighborhoods shipped with The Sims 2. He is the grandson of Patrizio and Isabella Monty, the son of the deceased Claudio and Olivia Monty and the older brother of Romeo Monty, and the deceased Unborn baby Monty. His cousins are Beatrice and Benedick Monty.

Mercutio has medium skin, brown eyes and messy black hair. He wears a biker's outfit, a black leather vest over a white T-shirt, and blue jeans that are torn on the knees. While Mercutio has brown eyes, he has the recessive allele for light blue eyes. When first played, he is 6 days away from becoming an adult.

He works part-time as a Drive Through Clerk from the Culinary career track. He is enemies with Tybalt Capp, because of the Monty/Capp family feud. He is best friends with Puck Summerdream, and both have crushes on Juliette's and Tybalt's sister, Hermia Capp, which might be a problem. Hermia's and Tybalt's cousin Miranda Capp also has a crush on Mercutio; however, the feeling isn't mutual.

When the Montys are first played, Romeo will invite Juliette Capp over. Doing so may cause Juliette to insult Mercutio, and he will get attacked by Tybalt who will also come over uninvited. When Puck's family is first played, he's having a party, and both Hermia and Mercutio are present. Both Puck and Hermia want to have their "first kiss" with each other. If Mercutio witnesses this, he will be furious at both of them.

Although he is generally nice and jovial, Mercutio is doing poorly in school. He also has a negative memory for everything except being potty-trained, which is odd considering most Sims have quite a few good memories.

Mercutio has 0 cooking points, while Culinary part-time jobs from Drive Through Clerk (level 2) up require 1 cooking point. This may have been an error by the game's creators.

If expansion packs are installed before the Monty family is first played, the player will be notified that Mercutio has skipped work, and will be fired if he does it again. This is due to the fact that the household gets reset following the installation of an expansion pack, resulting in Mercutio no longer being at work as a result.

Mercutio is the witty friend of Romeo, and kinsman to the Prince, in Shakespeare's Romeo and Juliet. He is killed by Tybalt, who is later killed by Romeo. 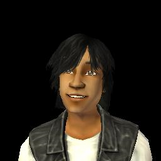