Melissa Sims is a deceased Sim from Strangetown. Her grave is located on Olive Specter's lot. It is unknown if Olive killed her, but it is a strong possibility. There is no evidence that she is related to the Pleasantview townie Amin Sims, or Vicki Sims, another Olive Specter victim. She died from starvation.

Like most pre-made deceased Sims from Strangetown, Melissa is very glitchy. Though her head-shot depicts a teenage girl, she is recognized by the game as an adult male on his last day before becoming an elder, which is typically a sign the Sim was corrupted in some way. If resurrected or summoned with the Tombstone of Life and Death, she will appear as a teenage girl with red hair which will disappear immediately after she appears, along with the second template face, and brown eyes.

If the player changes her appearance in the mirror, there will not be anything in it until a hairstyle is selected and then her face will appear but with dark skin, green eyes, and no body. If the changes are confirmed she will come back with the chosen hairstyle, her body will return along with her previous skin tone, but the green eyes will remain. If she becomes a vampire or is aged to something different, she will no longer have the face in her head shot but the one shown below. Melissa has an unused hairstyle in her adult and elder thumbnails, which is not pictured in her teen headshot. The unused hairstyle can be seen in the picture below, which is found in SimPE.

Unusually, she has the hidden Power Aspiration. Melissa has no eyebrows, like most Sims buried in Olive Specter's backyard. There are two pictures of her as an adult and an elder hidden deep in her character files. They can only be seen in SimPE. It is understandable that the image of her as an adult would be there, since she is recognized by the game as an adult. It is unknown why the image of her as an elder exists. In each game, she will be given a random hairstyle and outfits. Therefore, depending on which expansion packs and stuff packs are installed, her hair and clothes may be different from what is shown in her head-shot. Apparently Melissa's head-shot depicts her to wear an outfit consisting of a dark red jersey, and dark blue jeans. The hair in her hidden images is used as the female's hair in the Official The Sims 2 Trailer in 2003.

Strangely, when trying to open Melissa's SimDNA in SimPE, the page will appear blank. This happens with almost all of Olive Specter's victims. She has no personality points and her zodiac sign is Cancer. Melissa is thin but according to the game, she is supposed to be fit. Bella Goth also has this case. She has the 20th face template in her adult and elder thumbnails. Though it is possible to fix Melissa in SimPE, that doesn't make her 100% safe to play as. It's possible to make a replica of her by extracting her appearance with this method.

Warning
Resurrecting her has been known to cause corruption. 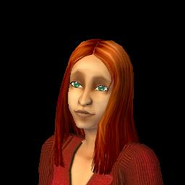 Melissa with her genetic face and eye color.
Add an image to this gallery

Retrieved from "https://sims.fandom.com/wiki/Melissa_Sims?oldid=907828"
Community content is available under CC-BY-SA unless otherwise noted.