Matthew Hamming is the only male 5-star celebrity from Bridgeport. He is best friends forever with Richie Striker. He is good friends with Marina Prattle, Caroline Custard and Elvira Slayer. He dislikes his brother, Michael Sleep, and film director Alan Stanley. He is enemies with Reuben Littler.

His appearance is very formal, as he wears a scarf and a jacket over his shirt. He has a very muscular body to keep his appearance since he is an important celebrity.

He works in the Film career at level 8.

His brother, Michael, is a townie, unlike him who's a playable Sim. He doesn't share the same surname with his brother. He or his brother might have changed it, or they could just be half-brothers from the same woman marrying different fathers (or vice versa), and are shown as full siblings to simplify.

He has a wide range of skill points; 5 in Charisma but needing 8 to his job, 5 in Writing, 4 in Guitar skill, 2 in Cooking and Athletic skill.

Matthew is implied to have a hard time looking for the "perfect match" to suit his desires for love. However, in his family bio it states that he has always left "a trail of broken hearts," perhaps meaning that he makes rash decisions in dating, or that he is trying to find his soul-mate but has had limited success (which can be a consequence from his Flirty trait). His personal bio may suggest that he could be interested in dating vampires, being that they are "adverse to light in general."

Matthew is an adult, and has 20 days away from becoming an elder. He carries 2 books, 1 guitar, and 1 laptop in his inventory.

Based on his name, appearance, and occupation, Matthew may be based on real life actor Jon Hamm. Additionally, his last name, Hamming, may also be related to the expression "What a ham!", meaning that an actor is exaggerating their expressions and emotions excessively; in other words, being a show-off.

With a 180 degree view of the Ocean, Cliff Cottage is the perfect house for entertaining on a grand scale or just getting away from it all. 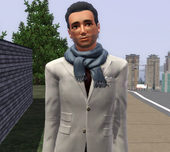 Second Floor
Add an image to this gallery
Retrieved from "https://sims.fandom.com/wiki/Matthew_Hamming?oldid=905703"
Community content is available under CC-BY-SA unless otherwise noted.