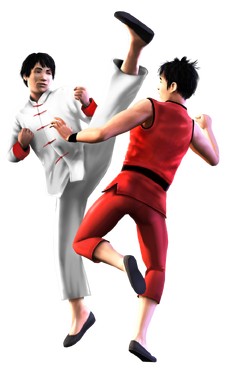 Martial arts skill is a skill introduced in The Sims 3 World Adventures. The trait Disciplined increases its learning rate.

Sims can train at the Phoenix Academy of Martial Arts in Shang Simla. However, Sims may purchase a training dummy, Board Breaker, and books to train at home. Sims get different color belts at different levels, just as real martial artists do, and apparently, Sims are using The Black Tiger-Kung Fu (or in this case Sim Fu) style.

At Level 5, Sims may also Meditate to increase the martial arts skill as well. Meditating for one hour will cause a "Meditative Focus" moodlet to appear. The positive moodlet starts with a duration of 15 minutes and increases as the Sim continues to mediate, maxing out at just over 4 hours of focus for around 2.5 hours of meditation; the Sim receives no further focus for continued meditation. If the Sim stops meditating and then restarts, the Meditative Focus moodlet will not begin increasing its duration again until the Sim has continued to meditate for an hour straight. When the Meditative Focus moodlet reaches 4 hours in duration, the Sim will glow with a green aura, levitate, and may choose to "Zeneport" to any location on the map, which will remove the focus moodlet and end the meditation. Receiving the Master of Meditation (MOM) challenge will also allow the Sim to teleport via "Tranquil Transference", which can be used at any time the Sim has more than 30 minutes of focus remaining, at the expense of 30 minutes of focus (i.e. 2 hours of focus allows 4 Transferences if no time is wasted between teleports). The animation for Tranquil Transference is nearly instant, as opposed to Zeneport, which required almost a half hour of slowly fading out, then back in, and standing back up. Once MOM is achieved, Zeneport is no longer possible, forcing the Sim to rely on Tranquil Transference.

At level 8, sims will start to focus their chi into their attacks while sparring and perform some rigorous techniques like a flurry of jumping kicks or a single powerful roundhouse kick while airborne. Sims who have reached level 7 in the martial arts skill can teach other Sims as well.

Once a Sim develops their skill to level 1, they are able to spar with other Sims. By choosing the 'Spar' interaction on another Sim, Sims are able to build up their Martial Arts and Athletic skills in a friendly training session, which also steadily increases relationship. After reaching level 4 in the skill, they can enter one of Shang Simla's Martial Arts tournaments. To enter a tournament, pick up the phone and choose 'Challenge Spar Tournament Contender'. Now a rival can be chosen and declare a 'Ranked Sparring Match'. After the match, the Sim may even advance a rank!

The mummies in Al Simhara all have their martial arts skill on level 10. Your Sim should learn Martial Arts before they go to Al Simhara to lower the risk of getting cursed by the Mummy.

There are several challenges for martial arts which Sims can complete to unlock rewards.

Grand Master
Reach tournament level 5 to attain the title of "Grand Master" and help other Sims improve their Martial Arts skills much more quickly.
Master of Meditation
After 150 hours of meditation, your Sims can learn Tranquil Transference.
Sim Fu King
After 75 sparring matches your Sim will be better at sparring and matches than usual.
Timber Terminator
After breaking 150 boards of oak level or higher, your Sim will be able to obtain gems after breaking space rocks.

A Sim's martial arts belt will change colors depending on their level of skill.

The Spa Restoration
Received: Random
Goal: 'Give Class' at the spa (takes 2 hours)
Reward: §1000
Location: Day Spa
Text: The Day Spa wants to hold another session with a good Martial Artist to teach Sims how to ease stress by emptying their minds.

Try the Tourney
Received: Random
Goal: Go to China, defeat a Sim in a ranked match, return home, and report to the stadium.
Reward: §800
Location: China
Text: There's a Martial Arts tournament in Shang Simla and the local association wants to bring home the team prize. They will sponsor a stipend and reward for anyone who wins a tournament match.

Complete Victory
Received: Random
Goal: Go to China, become Grand Master, return home, and report to the stadium (takes 2 hours)
Reward: §2000
Location: China
Text: In its continuing demand for local stardom, the Stadium Sports Association, has chosen you as the most promising delegate for the Platinum Belt Championships. It's a huge honor and there's a handsome reward for the winner.

The Ultimate Challenge
Received: Random
Goal: Break a Space Rock using the Board Breaker then report in at the stadium (takes 2 hours).
Reward: §1000
Location: Stadium
Text: The Stadium is sponsoring a contest to see if anyone can break the supposedly indestructible Space Rock on a Board Breaker.

Meditation Benefits
Received: Random
Goal: Gain Meditative Focus moodlet then enlighten a Sim
Reward: Cash and relationship boost
Location: Any
Text: A Sim has been trying to attain a greater understanding of life through hours of meditation but it hasn't worked yet. They've suggested that you might have the patience to sit it out and let them know if it's actually possible. 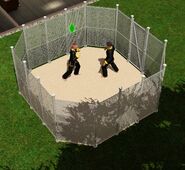 An arena
Add an image to this gallery
Retrieved from "https://sims.fandom.com/wiki/Martial_arts?oldid=879272"
Community content is available under CC-BY-SA unless otherwise noted.