Mars Champion is a pre-made townie who resides in Bridgeport from The Sims 3: Late Night. He strongly dislikes Victoria Boxer and is enemies with Victor Sharpe. He can be made playable by marrying him, or asking him to move in.

He is usually seen working as bouncer, though when first loaded, he is unemployed. He has nine points in gardening, five points in guitar, and mastered in handiness. 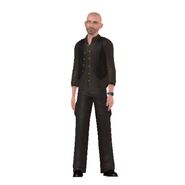 Mars' Everyday Clothing
Add an image to this gallery
Retrieved from "https://sims.fandom.com/wiki/Mars_Champion?oldid=915018"
Community content is available under CC-BY-SA unless otherwise noted.