Mark Stamp is a pre-made mailman who resides in Twinbrook, the world introduced in The Sims 3: Ambitions. His name matches his job. He can be made playable by befriending him and then asking him to move in, or by marrying him, but it would be a bad idea if he has the Commitment Issues trait. He carries a book in his inventory. His female counterpart is Carrie Post. 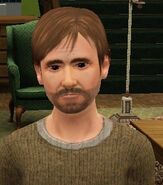 Mark Stamp in-game
Add an image to this gallery
Retrieved from "https://sims.fandom.com/wiki/Mark_Stamp?oldid=891361"
Community content is available under CC-BY-SA unless otherwise noted.