Marcela Jimenez is a pre-made townie from Hidden Springs. She can be made playable by marrying or asking her to move in. Marcela is acquainted with Maya Abbot, and is usually seen wandering around town. Marcela has mastered her fishing skill, nine points in athletic, and five points in gardening. Unusually for a pre-made young adult, Marcela only has four traits instead of the usual five.

If the town's population decreases, she will move into the neighborhood and always live with Roberto Vega, Kyle Anderson, and Michael Donovan. 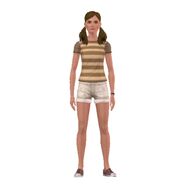 Marcela with a CAS Sim
Add an image to this gallery
Retrieved from "https://sims.fandom.com/wiki/Marcela_Jimenez?oldid=915920"
Community content is available under CC-BY-SA unless otherwise noted.