The Sims Wiki
Register
Don't have an account?
Sign In
Advertisement
in: Services, Types of NPCs, Maids
English 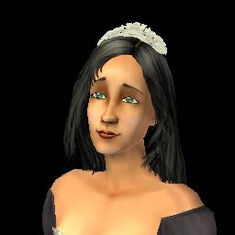 Kaylynn Langerak, a maid in The Sims 2

A maid is a service NPC that can work for Sims for Simoleons. Maids arrive daily at about 10:00 a.m and will leave when all their work is done, or when it gets late. Maids do such things as:

In The Sims 2, the option is absent if influence is present.

Maids have high cooking and cleaning skill points and are complete all-rounders.

In The Sims, the maid is a light-skinned brunette named Brigit, dressed in a stereotypical "French Maid" outfit. The only available interactions with her are "Dismiss", making her leave for the day, or "Fire" – to which she will not return afterwards. For §10 an hour she will make beds, clean bathrooms, spray roaches, mop up water on floors, wash dishes, and dispose of trash, pet droppings and ashes from fires. She will work nonstop from 10 am to 5 pm, unless there is nothing for her to do then she leaves early. She may not always get everything done in the 7 hours she's there. If the Poseidon's Adventure Aquarium from the base game is present, she will clean it, and she will clean the cages of small pets. She will not clean up unspoiled food unless it is on the floor or the ground, and will not flush toilets before cleaning them. She can and will clean some items, such as showers and tubs, before they become dirty enough to be cleanable by family members. (This has been known to cause shower/tubs to get "stuck" in a dirty state.)

In The Sims: Makin' Magic, if Brigit encounters the Skeleton Maid, she will quit in terror, but will return if a household member calls to hire her again.

In the trivia game that runs alongside the installation of The Sims 2, Brigit was revealed to be a favorite amongst the game's designers - explaining, perhaps, why the female maids in both subsequent games are very similar to her in appearance.

In The Sims (console), the Maid is a female NPC (Non-Playable Character) named Stella, who wears the normal "French Maid" outfit. Sims can't socialize with her. The only options available when she's clicked on are "Dismiss," which makes her leave for the day; and "Fire". As in most games in The Sims series, she charges 10 Simoleons per hour, and will leave if it gets too late.

She also makes beds, and disposes of old newspapers and ashes from fires, and empties indoor trash cans.

In the Get a Life mode, if the player is unable to pay for the maid, she will confiscate one or more objects in the house that are valued roughly equivalent to that of her pay. The player will be unable to rehire her until the next stage.

There is only one maid present in The Sims Bustin' Out. She can even be killed with the use of a mutant plant, only to return to do her job as a ghost at all of her clients. In this state, she is able to float through walls and Sims, allowing her to do more cleaning in a shorter amount of time. When she appears as a ghost, she doesn't scare Sims.

The maid is female, blonde, and wears the default maid's attire. She is slightly slow when cleaning. As in most games in The Sims series, she will take an object if a family doesn't have enough money to pay her for her services. While the only available interactions are "Dismiss" and "Fire", Sims can play chess with her, and she may be able to join other activities.

In The Sims 2 and The Sims Stories, maids can be either male or female, and Sims can socialize and build relationships with them. Sims can talk or flirt with a maid, and ask them to cook meals.[n 1] If Pets is installed, a maid may autonomously interact with a dog or cat, and will fill holes dug by wolves. Male maids wear half-unbuttoned pastel shirts with matching gloves, and black pants. Female maids wear typical "French Maid" outfits with white aprons, and have long hair with a small tiara. If a maid dies, is deleted, or is moved into a house and becomes a playable character, the game will automatically generate a new maid to replace him/her. There is one maid, Kaylynn Langerak, that is important in Pleasantview's story.

All maids have maximum Cleaning skill, but their Neat scores will vary; a maid's Neat score may be low, medium, or high. In some cases, a maid's Neat score may affect whether he/she will clean or pick up an item. For example, if only an extremely Neat Sim would think something needs cleaning, a maid with an average Neat score may not clean it. However, it also appears that a maid may clean at least some items before a playable Sim with a similar Neat score would see them as needing to be cleaned.

In The Sims 2, maids will flush un-flushed toilets before cleaning them.[n 2] They will also clean up abandoned meals, even if the food hasn't spoiled yet. If a maid is present, a Sim who stops eating a meal to answer the phone or pet the cat may find his or her food being taken away. Maids will usually put away books that sloppy Sims leave on floors and tables, but a maid with a low Neat score may leave a book lying around. In general, maids will finish cleaning inside the house before cleaning up outdoors. This has an effect if the maid drops garbage because their route to the garbage can was blocked, or because the garbage can has been knocked over. If there is any indoor cleaning left to do, the garbage that was dropped or spilled will not be picked up until that indoor cleaning is finished, even though a knocked-over garbage can will be picked up as soon as the maid notices it.

A maid can mop up puddles that are under objects such as bathtubs and showers, even though other Sims cannot. Maids may also clean up drinkable espresso left in an espresso machine, something that playable Sims cannot do, though they will not always do this.

For some reason, a maid will not empty a toddler's potty. There are game mods that will allow maids to empty the Maxis potties, but a maid may still leave a potty un-emptied. Maids will ignore some items such as cups from the Fruit Punch Barrel[TS2:U], worn-out catnip mice[TS2:P], and worn-out hobby magazines[TS2:FT].

Unlike the maid in The Sims, maids in The Sims 2 will not enter bathrooms that are in use, and will come at once if called after 10:00 am, as long as the call is not made too late in the day.

In nearly all neighborhoods from The Sims 2 and its expansions and spin-offs, there are three pre-made maids: two female and one male. However, there are no pre-made male maids in Belladonna Cove, where all three maids are female; and in Strangetown there are technically four pre-made maids, as Jessica Ebadi was a maid prior to becoming a ghost.

List of default maids from The Sims Life Stories[]

Oddly, there are images of Brigit the maid from The Sims hidden deeply in the character files of default maids such as Genesis Lam and Kaylynn Langerak. They can be found using SimPE. It is unknown why the images are there, but it is possible that it might be just one of many Easter eggs.

In The Sims 3, maids charge a flat rate of §125 per day, rather than charging by the hour. Aside from that, The Sims 3's maids are like the maids in The Sims 2. In The Sims 3, as with all NPCs, Sims can interact with the maid like a normal Sim, but cannot do this while the maid is at work unless they ask the maid to hang out. While a maid is at work, Sims can either chat with them, dismiss them, or fire them. Sims can also WooHoo with maids, and their children may have the "Makes No Messes" hidden trait.

The maids can be male or female. Male maids wear half-unbuttoned pastel shirts with matching gloves, and black pants. Female maids wear typical "French Maid" outfits with white aprons and a small tiara. Their outfit, however, is much less revealing than it was in The Sims 2.

As in The Sims 2, if a maid dies, is deleted, or is moved into a house and becomes a playable character, the game will automatically generate a new maid to replace him/her.

Kaylynn Langerak, an NPC maid from Pleasantview, is the only child when The Sims 3 begins, and is not a maid.

Most of the maids have the same personality, while some pre-made maids, such as Delicia Hoover, have a different one. However, generated maids always have the Brave, Charismatic, Kleptomaniac and Neat traits. By default, each generated maid has a 15% chance to have the Inappropriate trait. With the use of hacks, it's possible to choose different traits for maids. The maids in Oasis Landing are Plumbots who have the Solar Powered and Competent Cleaner trait chips.

Maids may steal things from a household if they're alone and still around during evenings. As in The Sims: Makin' Magic, they will freak out and quit if they encounter Bonehilda, despite having the Brave trait.

The vacation destinations in The Sims 3: World Adventures do not have pre-made maids. The maids that do appear are simply generated by the game when needed.

In the The Sims 4 base game maids can be hired on a one-time basis or as a recurring service. This action can be performed by using an adult's phone. The rate is §40 plus §20/hour. If a Sim cannot pay the rate, it will be added onto their bills, and the maid will refuse to work for the Sim until the bills are paid. The maid will make beds, clean the house, and repair broken items. There was a glitch where the maid was paid but did not come, however this has since been fixed.

In City Living, an apartment with the Serviced Apartment lot trait will spawn a maid every weekday to clean the apartment, the cost of which is included with the rent. In The Sims 4: Discover University, maids come every weekend to university housing lots to clean up the lot, at no extra cost to the students.

In the Bust the Dust Kit, maids will use vacuum cleaners to clean dusty floors.

Maid in The Sims 2, standing next to her van

Male maid in The Sims 2

A maid in front of a van.

Kate Pistachio cleaning a sink in The Sims 3

Kate mopping the floor in The Sims 3

A pre-release render of a maid in The Sims 4

Male and female maids in The Sims 4