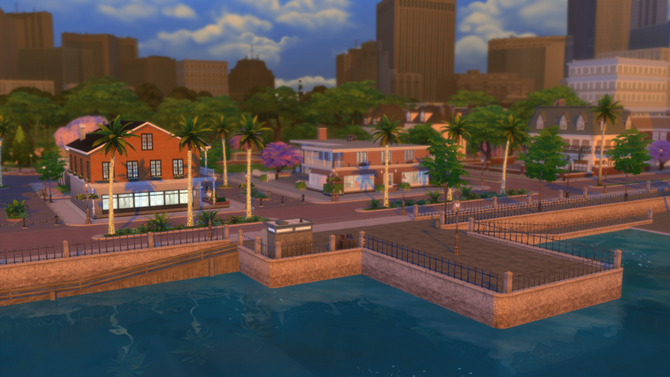 Magnolia Promenade is a neighborhood[1] introduced in The Sims 4: Get to Work.[2] It is comprised of four lots, three of which are retail.

The neighborhood seems to be set near or in downtown Willow Creek, considering that both have the same architectural style and Magnolia Promenade shares its name with Magnolia Blossom Park, Willow Creek's park. Although there are only four standard lots in the promenade, there are two other lots that appear to be set in this neighborhood; the Police Station and Willow Creek Hospital, both facing each other in the same plaza. It appears to be located at riverside or seaside, as when playing in any of the four lots, there is a shoreline with a steamboat.

With The Sims 4: Seasons installed, it shares the same climate as Willow Creek with four season weather ranging from hot and stormy to freezing with blizzards.

Paddywack's Emporium is a general retail store. It showcases toys and other collection items.

JF&S Clothiers is a clothing retail store. The store sells outfits that Sims can buy.

The Roadstead is a general retail store and is the largest normal lot in the world, showcasing multiple items, such as mannequins and electronics. It appears to be based on modern retail stores.

Preeminent Domain is the only empty lot in Magnolia Promenade, which the player can use to build whatever they want in it.

Retrieved from "https://sims.fandom.com/wiki/Magnolia_Promenade?oldid=924490"
Community content is available under CC-BY-SA unless otherwise noted.