The Sims Wiki
Register
Don't have an account?
Sign In
Advertisement
in: Services, Types of NPCs, Unused NPCs,
and 2 more
English 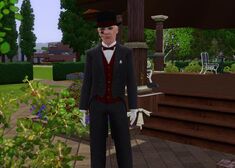 A Magician in the park

Magician is a service NPC that is featured on The Sims 3: Showtime. They can be either male or female and are attired in black suits with red vests, white gloves and top hats. When hired, they perform several magic tricks at events. Playable Sims can also become one by joining the Magician career track, although their duties differ from NPC magicians.

They were originally planned as one of the initial Service NPCs for the base game, The Sims 3, but developers removed their service before it was released. However, they were re-introduced following patch 1.8.25, so traces of them can still be found in the game. Because their services were still not included in any expansion packs at the time, they can only be seen wandering around the park in the afternoon hours for a brief time.

It is difficult to interact with them, because they tend to vanish just before a Sim reaches them. This does not always happen, and it is possible to talk to a Magician in the park. In earlier patches, it was reported that there were glitches surrounding the offspring of Magicians, but now they have been fixed.

They were later re-introduced to the Showtime expansion pack, where Sims can now call to hire them on the phone to perform for several events. In addition, playable Sims can also become magicians through the Magician career track where they can learn magic tricks and can start auditioning for gigs at local venues, bistros, coffeehouses and parks to gain experience.

When a Sim calls for the service of a Magician, a townie will come to perform the service, not the playable Sims who work in Magician career.