Magic is introduced in The Sims: Makin' Magic, consisting of spells and charms that can be obtained by combining ingredients. All magic and its required ingredients can be viewed in The Start Here Spellbook, though adults and children have separate spells and charms. Adult Spells are crafted with the Spellbound Wand Charger while adult charms are forged with the EverAfter Crafter. Children can craft both spells and charms with the MagiCo NeoMagical Newt. Most children's magic consists of charms, but kids have their own versions of the Get Happy, Smiley Face, and Enchant spells. The child versions of Get Happy and Smiley Face can also be used on adults.

When Makin' Magic is installed, all residential lots will be visited by the Mystery Man, who will deliver the MagiCo Magical Starter Kit. The package contains a wand, 35 MagiCoins, spellbook, wand charger, A Hole in the Ground, butter, toadstools and toad sweat. The ingredients allow for a single charge of the Toadification spell. The wand charger must be placed on a surface, so the package also contains a Truly Charming End Table, which the wand charger will be sitting on.

Any Sim may become magical by obtaining a Magic Wand. A single wand is included with the MagiCo Magical Starter Kit, and an unlimited number of wands can be obtained with the Spellbound Wand Charger and MagiCo NeoMagical Newt. Wands can also be purchased from the Mystery Man in Magic Town for §50. To make a magical Sim become non-magical they can sell their wand to the Mystery Man, which will also remove all spells in their inventory and prevent them from using any magic unless they obtain a wand again.

Magic usage is strictly monitored; outside of Magic Town, casting spells and charms in front of non-magical Sims will prompt a visit from the Spellchecker, who will issue a citation to the offending Sim. Fines will gradually increase with each successive offense. This only applies to Sims who witness magic being cast, and not the target of a spell themselves. To avoid a visit from the Spellchecker, it's best to ensure that magic is only cast in a room away from non-magical Sims or at times when they are not present.

Once three ingredients have been added, the "Charge Wand" (for the Spellbound Wand Charger), "Make Magic" (for the MagiCo NeoMagical Newt), or "Make Charm" (for the EverAfter Crafter) interaction will become available. If the correct ingredients are used, a spell or charm will be created. If the wrong ingredients are used, then nothing will be produced and the ingredients will be lost. The number of spell charges an adult will receive is based on the type of spell and the Sim's Cooking skill. The number of charges an adult charm receives depends on the type of charm and the maker's Mechanical skill. A higher skill level will result in more charges. Child spells only ever result in a single charge, while child charms always receive six charges.

All magic has a positive outcome and negative outcome based on certain factors such as whether the target is a magical or non-magical Sim, the motives or mood of the caster, objects or NPCs on the lot, Skill level, Fame level, Personality, Relationship level and life state.

Unlike spells, Charms take the form of objects which can be placed on either the ground or a surface. Sims must physically touch the charm in order to cast it. Charms emit light and will gradually become dimmer as charges are used. When a charm is fully depleted of charges it will turn dark, but may still be kept as decoration. Some charms will not count as an offense if cast in front of non-magical Sims.

Featured in The Sims: Makin' Magic, magical growths are special objects that can automatically appear on the lot when a family has cast 15 spells or charms while living on a Residential lot in the neighborhood, or 10 while living on a Magic Town residential lot. All spells and charms cast by adult family members count toward the number needed for a new growth, even if they were cast on community lots, but spells and charms used by children do not.

Some magical growths can be sold in Buy Mode and some can also be purchased for Magic Town lots, however growths on these lots will not be functional.

The Crystal Clear Ability Rock is a type of magical growth that can appear on a residential lot. These crystals allow Sims with wands to learn special abilities which can be used to entertain other Sims, teleport to an area, and even extinguish fires. A crystal will become inert after it has taught its ability to three different Sims. Crystals also emit light, meaning they can also function as lamps.

Each crystal takes two-to-three days to grow to full size, but can be used at any point. Children can only gain the 'Hot Foot', 'Magic Trick' and 'Teleport' abilities, and they will keep those abilities after using the Age of Instant charm. Using the Teleport and Extinguish abilities is considered casting, and may result in a visit from the Spellchecker, though it also counts toward the number needed for a new growth.

There are seven different crystals, each with a specific color:

The beanstalk begins as a short plant, with each segment counting as a separate growth. If the beanstalk has 17 segments, it can be climbed to access a secret lot in the clouds. However, beanstalks have a pre-determined growth limit, meaning that some beanstalks will never grow to maximum height. Beanstalks on Magic Town Community lots are not climbable. Beanstalks which grown on Sim-Owned Residential lots in Magic Town are climbable.

These flowers do not require water, and therefore never wilt and die. Strangely, they can also be used as an end table. Sims will not autonomously place objects on the flowers, but will use any object placed on them. Solar Powered GEraniums can only be placed outside.

The Root of the Problem[]

This root is purely decorative. Contrary to popular belief, it will not cause objects to break and has absolutely no effect on gameplay.

Unlike other growths, toadstools may possibly spring up when Sims sit on the Champignon Toadstool Chair. This will be indicated with a rapid "popping" sound. Having a Sim alternate between sitting on two toadstool chairs will guarantee that toadstools will grow. Toadstools can be harvested for use as an ingredient. 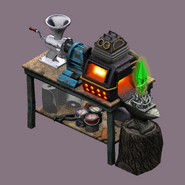 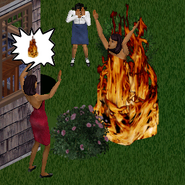 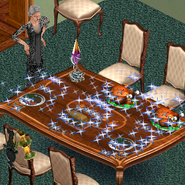 Horn of Plenty creating food on the dining table 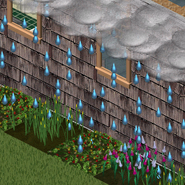 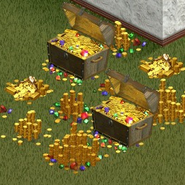 The positive outcome of the Rain of Riches charm 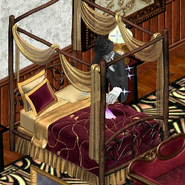