Madison Fortuna is a pre-made teenage sim from Four Corners, one of the neighborhoods shipped with The Sims Life Stories. She is the daughter of Fiona and the deceased Bailey Fortuna. She is in private school. Her mother loves money, but she herself can't stand it. Madison is in a romantic relationship with Jacob Margison. However she doesn't have a romantic relationship with him outside the Free Play version of the neighborhood, as they do not know one another in the Story Mode version. She only appears in the story as a guest at Mickey Smith and Agora Tchotchke's wedding.

Madison and Fiona can be found living in 21 Hyacinth Circle at the end of Riley's story, as well as in the Free Play version of the neighborhood and are ready to be played. Madison is 12 days from being an adult. She has the Family aspiration and the Aquarius zodiac sign. Madison's Free Play bio includes one extra blurb that further establishes her aspiration: "She hopes to start a family of her own someday."

Madison's face is primarily made of the 25th Maxis face template in Create a Sim, except the nose which uses the 1st face template. The eyebrows also use a different face template, as they were inherited from her father's facial structure. Madison's SimDNA in SimPE shows that she carries the recessive alleles for red hair and grey eyes. She bears a striking resemblance to Tiffany Sampson from Sim State University. 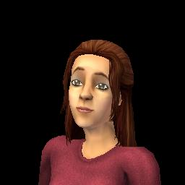 Madison's head-shot in the Free Play version of the neighborhood.
Add an image to this gallery
Retrieved from "https://sims.fandom.com/wiki/Madison_Fortuna?oldid=912606"
Community content is available under CC-BY-SA unless otherwise noted.