The Sims Wiki
Register
Don't have an account?
Sign In
Advertisement
in: Sims, Female Sims, Adults,
and 31 more
English

Lyla has the Romance aspiration and her zodiac sign is Libra. Her main interests include in paranormal, money and weather. Lyla also has a hidden Family aspiration token. An image of Lyla in her elder stage can be found in her character file and can be seen using SimPE. Unlike most pre-made deceased Sims, Lyla was created at the same time as the rest of her family.

Before she died, she divorced from General Buzz and moved out. The reason they broke up is unknown, and Lyla's whereabouts after she moved out of the Grunt house is also not known. It appears that Lyla met Olive Specter at some point because Lyla mysteriously died in Olive's garden, where her grave can be found. Her ghost is that of a Sim who died of electrocution.

Strangely, her family has no memories of her death. It is not clear if this is a developer oversight, or if the family was intended to be unaware of her death. With The Sims 2: Nightlife or a later expansion, the player is able to move her grave to a different lot, which will give her sons a memory of her death. Olive illogically has a memory of Lyla dying long before her own son Nervous Subject was born, who is now an adult. This is inconsistent with the timeline of Lyla leaving her family after Buck Grunt grew up to be a child.

Before Lyla died, she was 36 days from being an elder, meaning that she may have used the Elixir of Life shortly after entering adulthood. According to SimPE, Lyla had unlinked relations with Creon and Willow Nigmos, Earl E. and Tim Lee DeMise, Hugh and Lou Thanasia, Ichabod Specter, Peponi and Lerato Muenda, as well as townie Bella Goth.

When viewing Lyla's personality in SimPE, it can be seen that she has 6.9 playful points and 8.2 nice points which wouldn't be possible in normal gameplay.

Lyla's entire character file is in an outdated format, as a result her face is corrupted and her clothing in-game is randomized. Her corrupted appearance is genetic. If Lyla has more children after being resurrected, they will inherit her corrupted facial features. Changing her appearance with a mirror will make her appearance even more glitched.

Lyla's true appearance features tanned skin, blonde hair and dark blue eyes, despite her original portrait displaying her with brown eyes. She also wears a very elegant pink dress in her thumbnail. However, as shown in the family album, her clothes and hairstyle when she moved out of the Grunt house are different - she wears a blue tank top and tan trousers. Her outfit data also contains another casual outfit; a red dress with boots and a long black coat.

Lyla's original face for her elder life stage has a deformed low LOD face model which is only visible on low-end settings, Agnes Crumplebottom also shares this issue.

Warning
Resurrecting this Sim has been known to cause corruption in the game.

An official Maxis recreation of Lyla and her family was uploaded to the The Sims 4 Gallery on February 28, 2019, marking the 19th anniversary of The Sims. In this timeline, Lyla is a playable ghost who died because she was poisoned. She is friends with all three of her sons, but her ex-husband Buzz is only an acquaintance. Unlike the remakes of the Newbie family and the Pleasant family on the Gallery, Lyla has several skill points in a variety of different areas. Despite being a ghost, Lyla's simology panel indicates that she will become an elder in 23 days. 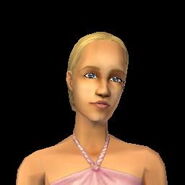 Lyla's intended appearance in The Sims 2, based on her Geometric Data Container information 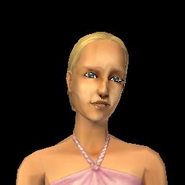 Lyla with her glitchy genetic face and eye color

Lyla's hidden thumbnail of her as an elder. Note that her pose here is not used in the final game

Lyla Grunt moves out of the Grunt house

Lyla Grunt resurrected in The Sims 4

A child of Lyla Grunt who inherited her glitched face