The Sims Wiki
Register
Don't have an account?
Sign In
Advertisement
in: Worlds in The Sims 3, Official downloads, Lunar Lakes
English 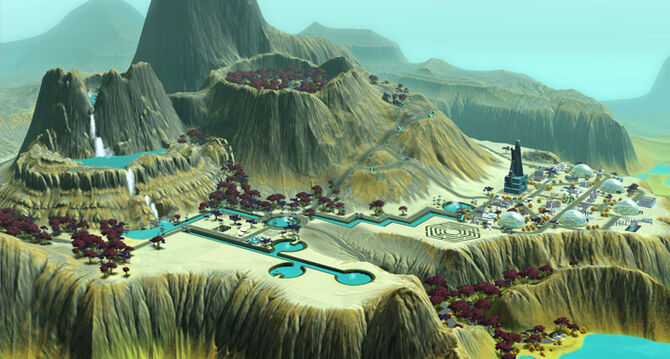 Lunar Lakes is a store world for The Sims 3. It was announced on February 11, 2012. This is the fourth world that The Sims 3 Store has released.[1][2] This world is set in outer space on another planet with geometric shaped lakes, different trees and strange land markings making the world unique and visually different from any other world in The Sims series.[3] The planet has similar living conditions to the planet of SimNation, making it possible for Sims to live there. The world costs 2,450 SimPoints[4] which can be purchased on The Sims 3 Store.

Stranded on a foreign planet after their spaceship became disabled, the survivors utilized homeworld technology and newly-discovered crystal tech to survive at the edge of space. As the generations have progressed these intrepid Sims built roads, developed agriculture, and established a thriving colony. Where will you take their explorations next?

All-New Gameplay Object The Tree of Prosperity is available exclusively with Lunar Lakes and allows you to expand your game with all-new gameplay benefits. This exotic plant is made of floating crystals and changes shape throughout the day. Harvest fruit to improve skills and fulfill motives!

We Come in Peace!

Looking to move to new place that's out of this world? Tired of seeing the same old sun rise and set every day? Look no further than Lunar Lakes! You'll love the alien mushrooms that dominate the surface and you won't believe the size of the craters.

After a crash landing which left us stranded while in search of a new planet to colonize, our ancestors harnessed the native crystals to build a sustainable habitat. Our domes are an engineering marvel for those who love to bask in the glow of the warm sun. Not much of a ground dweller? Fear not! We've got you covered with our extensive underground networks.

As the leader of the Lunar Lake colonists and descendant of founder Anthony Cross, I extend my invitation for you to join our buzzing community. We know you'll love it here. And if you don't – you'd better. Once you arrive, there's no turning back!

Lunar Lakes is a world located on another planet, distinct from other The Sims 3 worlds. Lunar Lakes happens to be placed in the future. It is not clear what the motivation was for the original crew of the Perigee to seek out a planet to colonize. Fragments of several worlds from the inhabitants' homeworld have been recreated in bio-domes around the town. Descendants of families such as the Vanderburg family, Langerak family, and Specter family survived, and live here.

The world has a science fiction theme. The Perigee is the science lab, which was built from the space ship the residents' ancestors crash landed in. It is the tallest building in the town, and the only rabbithole building that is not a warp gate.

The urban sector houses most of the population, and is also the most technologically advanced sector. Most buildings in this sector are built in a unique, geometric style with futuristic architecture, with some buildings that are supported entirely by a single, slim column. It contains five bio-dome parks built in memories of the past worlds. Heading down hills of the urban sector leads to the lakes where Sims can swim.

On the upper hills resides the farming and residential sector, the inactive volcano hosts a plethora of native vegetation as well as pools formed by hot springs where Sims can fish. Most of the buildings here have dome-shaped roofs reminiscent of the native mushroom trees.

§10,000
Difficulty: 1
Wayne Ahmadyar
Wayne Ahmadyar is an all-star chef and an excellent angler. He cares little for science and politics, he just wants to cook great food and have a good time! With his charm and culinary expertise it's certain he won't be a bachelor for long.

§10,000
Difficulty: 3
Benjamin Benton, Dahlia Benton, Carly Benton, Jax Benton
Benjamin is a star athlete, and his wife, Dahlia, takes great pride in her job in law enforcement. They push their children to follow in their footsteps - discipline, athletics, routine. Though an excellent athlete Carly has a secret passion for music, and Jax excels at everything except sports...can their parents possibly accept them for who they are?

§10,000
Difficulty: 1
Theo Cardamom
Good food starts with a fabulous garden and Theo is very talented when it comes to growing fruits and vegetables. All of these fresh ingredients mean that any meal made at the Cardamom house is a meal to remember!

§10,000
Difficulty: 2
Alexander Cross, Patricia Cross
Power, wealth, and influence are the cornerstones of Patricia and Alexander's union. Too bad they don't also value romance and companionship. Patricia's main concern is saving face in order to further her political aspirations, while Alexander spends his days at the lab. Can the sparks of their former passion be rekindled, or will they continue to lead separate lives under the same roof?

§10,000
Difficulty: 1
Amira Grace
Amira is in love with Michael. He's in the military, she's in the military... it only makes sense that they'd get married and then their kids could be in the military too! There is only one problem, Michael seems distant... Amira is determined to woo him and uncover his secrets!

§10,000
Difficulty: 2
Mia James, Philip James
Newlyweds Mia and Philip have been busy furnishing their home and enjoying their new life together. Warmth and love abounds, but there is one thing missing from their idyllic family life - a baby.

§10,000
Difficulty: 2
Martin January, Lily January
Martin moved to the edge of town so that his scientist wife could pursue her passions. But Lily works too much and Martin misses the social scene. Though she loves her husband dearly Lily is easily distracted by her work and tends to neglect him. Can their relationship be salvaged, or will Martin leave Lily and return to his old life?

§10,000
Difficulty: 3
Pax Louie, Louisa Louie, Nadia Louie
The once prestigious Louie family was forced to move to the outskirts of town after Pax had a falling out with Patricia Cross. Used to the finer things in life the bohemian lifestyle is very foreign to them... will they be able to adapt and thrive, or will Pax make up with Patricia and beg for his old job back?

§10,000
Difficulty: 3
Doris Lucas, Finn Lucas, Theresa Lucas
Money is tight and Doris, a single mom with a teenage son and deviant daughter, struggles to keep her family together. Can her aspirations of becoming a famous painter fund her family and help them find a better life?

§10,000
Difficulty: 3
Carlos Mosqueda, Paige Mosqueda, Erik Mosqueda
Family, friendship, and food are the focus of the Mosquedas. What they lack in material goods they make up in happiness. Carlos loves to cook and throw dinner parties for their friends and neighbors.

§10,000
Difficulty: 1
Lars Royal
A talented collector who likes to hoard his "treasures", Lars has something for everyone. And takes something from everyone...

§10,000
Difficulty: 1
Petre Stewart
Everything in life has always come easy to Petre. Fame and fortune abound given his athletic and mental prowess. But this easy success has made him spoiled and moody. Is there someone out there who can tame this hot-headed bachelor?

§10,000
Difficulty: 4
Damien Su, Bethany Su, Timothy Su, Irene Su
The Su's marriage looks perfect on the outside, but is cracking underneath. Damien is a workaholic who spends too much time away from home, and raising two young children alone has made Bethany a bundle of nervous anxiety. Can Damien be bothered to find the time to save his marriage?

§10,000
Difficulty: 1
Frida Tamarind
Frida's smiling façade is a veil that hides a hardened criminal. Life has dealt her an unfair hand and Frida intends to take what she feels she deserves, regardless of who she takes it from.

§10,000
Difficulty: 1
Michael Tomyoy
Michael is a brilliant tactician and strategist, so of course he loves his job! There's just one problem... he loves Sofia Vanderburg, and his military life style doesn't mesh well with her free spirited, bohemian attitude. A military man distracted by love... will he choose his duty over romance?

§10,000
Difficulty: 1
Franco Wolff-Cruz
Franco is a simple dreamer leading an average life in a small house at the edge of town. He prefers to keep to himself and pursue stories of the life his ancestors lived on the home planet. Though he has always been content to be alone there is a special girl he keeps running into at the library. Will he ever gather the courage to talk to her?

§10,000
Difficulty: 3
Trenton Alto, Eleanor Alto, Jareth Alto
A descendant of the prestigious Alto clan Trenton has fallen out of favor with their rich and powerful neighbors. His wife, however, is still very much in the spotlight. Will Trenton continue to hang on to his wife's coattails, or will he strike out and make a new name for himself?

§10,000
Difficulty: 2
Kara Ansari, Raja Ansari
Kara is unhappy and yearns for money, power, prestige, too bad she is married to a farmer! Being a farmer suits Raja nicely... for now. He has secret ambitions to become the master of all evil and rule the world! Crafty, secretive, and a whiz with technology Raja keeps his ambitions secret from his wife.

§10,000
Difficulty: 2
Stefan Bayless, Anais Willheim
The simple pleasures of life are the basis of Anais and Stefan's relationship. Good food, good friends, and wild parties are the staples of this loving couple's life.

§10,000
Difficulty: 3
Christina Landgraab, Chris Landgraab, Christa Landgraab, Chrissie Landgraab
Christina is a brilliant scientist who is just a tad self-centered... she has created clones of herself so she can have the "perfect" family. But as her clone children grow up they also grow away from their creator. Will Christina keep her family together through any means necessary, or will she accept that her clones have independent dreams and lives of their own?

§10,000
Difficulty: 2
Arthur Langerak, Gloria Goode
It was love at first sight for Gloria and Arthur! They bonded over their passion for books and music and their engagement was announced six short weeks after they met. Arthur works hard to provide a good life for his future wife, but the daily drudgery of a salary man may not be for him...

§10,000
Difficulty: 1
Amelia Loveland
Amelia is looking for Mr. Right... only he doesn't seem to be looking for her! In a world with so many eligible bachelors why won't any of them look her way?

§10,000
Difficulty: 3
Gretel Sekemoto, Len Sekemoto, Kristofer Sekemoto
The Sekemotos are a science minded bunch! Gretel is a top tier geologist and Len an all-star astronomer. Together they delve deeper into their love of science while raising their gifted son.

§10,000
Difficulty: 1
Noela Spector
A lone wolf and a free spirit Noela is on a path of danger and intrigue as she pursues a life of crime! Young and independent she has always managed to stay one step ahead of the law, but for how long?

§10,000
Difficulty: 1
Sofia Vanderburg
Sofia strongly believes that everyone should be free to pursue their true passion! Anti-establishment and anti-authority political views have always been her credo, but now she finds herself drawn to a military man…can Sofia reconcile her feelings for Michael Tomyoy while staying true to her beliefs?

These Sims are pre-made, but homeless when Lunar Lakes is first loaded.

Outside view of Lunar Lakes

The Crystal Mine, the heart of the storyline of Lunar Lakes

Inside of the domes