Luke McDermott lives with his wife, Ginny and his two sons, Maximus and Travis at 180 Bounty Drive, Fertile Fields on a large farm-like lot in Riverview. This is appropriate to his lifetime wish of growing The Perfect Garden, as well as his Green Thumb and Loves the Outdoors traits. Because Luke is unemployed, it may be fair to assume that he is a farmer by trade, and actually makes his living by farming. Therefore, he may start off with wishes related to gardening such as growing plants or reading gardening books.

Luke starts out with an assortment of skills; fishing 1, gardening 7, guitar 1, and handiness 3. His starting inventory includes two lettuce seeds, two grape seeds, a tomato seed, an apple seed, a Sonaflux Guitar, and the books Gardening Vol. 1: The Watercan Chronicles and Game of Thorns.

At the start of the game, he is acquainted with Don Lothario, who lives nearby in an old granary. As Don appeared in Riverview (possibly via time travel) a few days before the start of the game, it is possible that Luke was one of the first people Don met in the town. It is also suggested that, as Don lives in an old, previously-abandoned granary, the granary might have been previously connected to Luke's land, and that Luke might have given it to Don, as he had no use for it.

In Old Town Cemetery, his mother, Abagail McDermott is buried, who died of old age. Luke is one of few premade Sims who have dead ancestors or relatives in the graveyard. 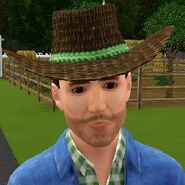 Add an image to this gallery
Retrieved from "https://sims.fandom.com/wiki/Luke_McDermott?oldid=894292"
Community content is available under CC-BY-SA unless otherwise noted.