Lucy Ferne is one of the pre-made townies featured in Twinbrook. She is usually seen wandering around town. She may eventually perform the jobs featured in Ambitions, such as Tattoo Artist or Stylist. She can be made playable by marrying her, or asking her to move in. Her personality makes her very hard to get along with, having the Evil, Mean-Spirited and Hot-Headed traits. Her name might be a pun on "Lucifer", which could match her personality, appearance, lifetime wish and aggressive facial expression. 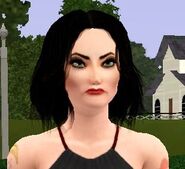 Lucy Ferne in-game
Add an image to this gallery
Retrieved from "https://sims.fandom.com/wiki/Lucy_Ferne?oldid=910829"
Community content is available under CC-BY-SA unless otherwise noted.