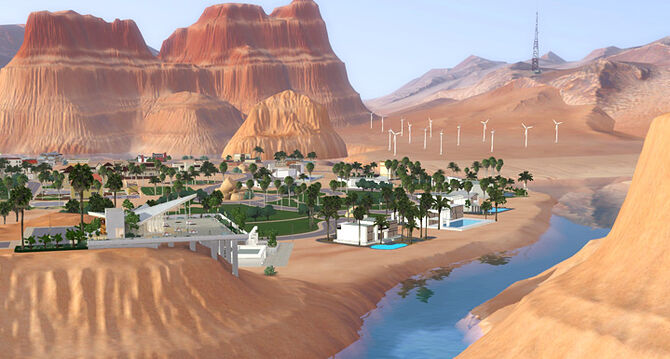 It is available in a Standard and Gold edition. The Gold edition contains The Lucky Simoleon Casino, as well as several extra objects, including the blackjack table and the slot machine.[2]

Rest and relaxation is the name of the game at The Sims 3 Lucky Palms! With ample parks, recreation locales, and a thriving culinary scene, you'll find yourself on an oasis of green amid shifting sands. This desert enclave offers manicured gardens, modern estates, and cozy abodes nestled on the banks of a pristine lake. At the heart of town lies a mysterious well that is said to grant wishes to those who are pure of heart…what will you wish for?

All New: The Wishing Well –Does your Sim long for Love? Wealth? Power and Fame? Perhaps they yearn for the pitter patter of little feet, or maybe they just want to be happy… The Wishing Well can help your Sim achieve all of these things and more! Just toss a coin and make a wish and see if dreams come true...

Lucky Palms is a small resort town set in an oasis, modeled on Palm Springs, California, a real-life desert resort and a famous playground for the rich and famous in the 1950s and 1960s, an inspiration that can be seen in the architecture and the abundance of palm trees and wind turbines.

Lucky Palms is actually two towns in one, segregated by a highway; on one side is Lucky Palms, set at the edge of a beautiful blue lake, and on the other side rests a dried up lake with a small collection of houses and abandoned community lots surrounding it. There is also a gas station, a pharmacy and a yacht club that have been abandoned and converted into residential lots. A large percentage of the world's lots are empty, giving the player freedom of mind to build as they please. If Seasons is installed, the Civic Center Park behind the City Hall will be replaced with festival grounds.

The town features two returning Sims from Pleasantview in The Sims 2: Darren Dreamer, who is living by himself, and his future wife Darleen Matlapin, living with her parents Mariana and Omar.

There is a wishing well in the middle of the town, located in the Botanic Garden, just in front of city hall.

Children and teenagers in Lucky Palms all have pre-set C grades at school at the start of the game.

Looking for love in Lucky Palms! Within 3 miles of City Hall, Lucky Palms

Darren Dreamer here, artist in residence to the fabulous town of Lucky Palms! And by artist I mean REAL artist, not the bumming on my best friends couch hopefuls! I am a single adult male whose interests include painting, computer games, and preparing grilled cheese sandwiches. I don't really enjoy spending much time outdoors, but I do love painting landscapes!

Something I love about our town of Lucky Palms is how many unique and beautiful things there are to paint. Whether it's the rich orange and reds of the mountains, the desert green on the skin of the cactus, or the rising sun's reflection on the surface of the lake our surroundings are bursting with natural beauty and vibrant color!

The Blooming Cactus Bistro offers the best views of the city at sunset and my place to grab a bite and a bit of inspiration. Are you looking to be inspired? If so, you can find me at 59 Gobi Road. I look forward to meeting you!

§10,000
Difficulty: 1
Isadora Bard
Isadora needs everything to be shiny! Her hair, her clothes, her imagination, they all shine brighter than the sun. If life gave her lemons Isadora would make lemonade...and she would probably throw a handful of glitter in for good measure.

§10,000
Difficulty: 2
Roy Phillips, Palmer Hayes
Roy and Palmer knew each other as children, but grew apart as the years went by and they followed different paths in life. Reunited when they both happened to retire in the same desert town these two were fast to rekindle their friendship. Roy and Palmer... best friends forever!

§14,000
Difficulty: 4
Morgan Claremont, Sammi Claremont, Tabbi Claremont, Endora Kravitz
When Morgan took a new job in a new town he had no idea that his mother-in-law would be tagging along! What was supposed to be a "short visit" when their first child was born has turned into an extended stay. Will true love triumph over a meddlesome mother-in-law?

§10,000
Difficulty: 3
Taj Diwan, Zahra Diwan, Sahan Diwan
Special Agent Taj Diwan is deep undercover in his investigation of the drained lake bed and the Sims who live there! To aid his deception he's brought his family with him. Aided by his dedicated and supportive wife, Zahara, he has infiltrated the small neighborhood and is investigating criminal activities in the area.

§6,000
Difficulty: 3
Barry Gilbert, Hanson Gilbert, Joshua Gilbert
After the death of his beloved wife, Barry felt a change of scene was in order and bought property over a popular online auction site. Unfortunately he paid double what the "cozy lake front abode" was worth and is stuck with his poor investment. The bills are high and the lake is dry... will the family stick together through these tough times?

§18,000
Difficulty: 2
Gennie Gomez, Beulah Patterson, Evangeline Finch
Three gifted women, best friends through thick and thin, are living together during their golden years. Gennie is a talented artist, Beulah is an expert angler, and Evangeline enjoys gardening and hacking. These brilliant women are determined to make the best of the rest of their lives!

§75,000
Difficulty: 1
Jaycen Hendrix
A confirmed bachelor for life, Jaycen works hard and plays harder! He loves fast cars, beautiful women, and a well made grilled cheese sandwich. Can he continue to grow his father's business empire, or will his playboy ways cost him everything?

§15,000
Difficulty: 2
Kinslee Hudson, Ariel Hudson
Madly in love and daring enough to break convention, this young couple is pregnant with their first child and shunning the civil trappings of wedlock, though they have decided to share Kinslee's last name. Can these wily hipsters maintain their unique perspective on life amid a more conservative desert crowd?

§7,000
Difficulty: 3
Emi Irwin, Richard Irwin, Cricket Irwin
Unemployed, unreliable, and unfaithful Richard is hardly a good role model. And though beautiful Emi Irwin is deeply troubled and working on the wrong side of the law... is there any hope for their daughter to have a normal childhood?

§30,000
Difficulty: 3
Brayden King, Kadia King, Abrielle King, Abrianna King
The Kings are pillars of respectability and popularity. Their twin daughters excel scholastically and are both gifted with creative talents. As these two cultivated teens grow into adulthood where will their life paths take them? And what will their parents do once their little birds have flown?

§5,000
Difficulty: 1
Lola Lancaster
Dazzling former showgirl Lola has been entertaining a steady string of gentlemen since the untimely, and according to the police "accidental", death of her husband. But one affair may have gone too far...pregnant and in love with a married man, what's a girl to do?!

§10,000
Difficulty: 1
Marisol Loera
An ambitious young author, Marisol left her fast paced life behind in order to focus on her writing. She is working on her debut novel, a murder mystery set in the town of Hidden Springs during an unrelenting blizzard. Marisol intended to move back home after completing her novel, but a certain police cadet may cause her to relocate permanently...

§100,000
Difficulty: 2
Eli Vokoban, Lina Lancaster
Eli is a lifelong ladies man and his current lady is the lovely - and much younger - Lina Lancaster. Lina claims to love Eli, but neighbors whisper that she is only in love with his fortune! Rumors say that Lina is pregnant... but is Eli the father?

§45,000
Difficulty: 1
Kitty Price
Former starlet and eccentric art collector Kitty divides her time between cooking and decorating her underground girl cave. A former action movie star Kitty first and foremost believes in Girl Power! Rarrr! Will she find a special someone to enjoy her retirement with, or will she scare all the potential suitors away?

§16,000
Difficulty: 3
Marissa Ross, Phoenix Ross, Addison Ross
Marissa has been very successful in her pursuit of a top tier business career, but Phoenix has failed to find success in the military. As Marissa spends more and more time at work Phoenix finds himself raising their daughter alone. Will these former lovebirds find their way back to one another, or does a separation loom in the future?

§10,000
Difficulty: 1
Yolanda Shaw
Short skirts and persistent flirts, Yolanda likes the boys and the boys like her! This good time gal shirks responsibility and hates to be tied down, but recently she noticed some changes in her daily routine. Is she really expecting a baby? If so, can she possibly put her fast paced life on hold to raise a child alone?

§20,000
Difficulty: 1
Lennon Sosa
A top student from the prestigious Formage Grille cooking school, Lennon has a big appetite and even bigger dreams! Known for his lavish parties, robust garden, and scrumptious cuisine he quickly became a town favorite, but can he surpass Romon Tanner and become known as the number one chef in town?

§12,000
Difficulty: 2
Walker Sparks, Piper Sparks
Widowed when his daughter was just a baby, Walker has struggled to balance his career and raise his child. His want to provide Piper with financial security has turned him into a workaholic and an absent father. Too late Walker sees the damage that has been done... can he mend his relationship with his daughter before he loses her forever.

§12,000
Difficulty: 1
Donnovan Steel
A young cadet with a winning smile and a passion for justice, Donnovan is the face of the police force, literally! He was recently featured on the cover of the annual "Hot Desert Cops" calendar. Will this young enforcer stay on the correct side of the law, or will fame lead him astray?

§10,000
Difficulty: 1
Naomi Nita
Naomi's motto is "Prepare for the worst so that you will survive the zombie apocalypse." Her home is small and sparse, but her underground bunker is designed to outlast anything the world throws at her. Rumor has it that she is investigating a long life serum on the side while pursuing her job as a scientist.

§25,000
Difficulty: 3
Romon Tanner, Aya Tanner, Ethan Tanner, Yuna Tanner
Four generations of cooking excellence define the Tanner family name, but now has an upstart with a fancy pedigree has come to challenge the Tanners as the best chefs in town. Will Ethan's home grown culinary skills triumph over the formal training of his nemesis?

§4,000
Difficulty: 2
Ezekiel Reid, Pansy Northrop
Ezekiel inherited his father's home back when there was still a lake. Unfortunately for him, when the water vanished the real estate's value did too. Unable to sell and too poor to leave he found a paying roommate in military cadet Northrop. Can this unlikely twosome cohabitate in peace, or will their differing personalities lead to conflict?

§20,000
Difficulty: 1
Darren Dreamer
A talented artist with eccentric tastes, Darren hates the outdoors, yet has a passion for painting landscapes through large windows. Rumor has it that his home came with a swimming pool, but he had it filled in so he could build a cactus garden in his backyard. Though art is his passion, being a stay-at-home bachelor is lonely business... is there a special Sim somewhere who is a perfect match for Darren?

§13,000
Difficulty: 2
Darleen Matlapin, Mariana Matlapin, Omar Matlapin
The Matlapin family are new in town, but thanks to Mariana's natural charm and social graces they are already well known and well liked by their neighbors. Their daughter Darleen has a dreamy disposition and an interest in the arts... and romance! Will Darleen find the man of her dreams amid the shifting sands?

View past articles · Vote on future Featured Articles · Other Featured Content
Retrieved from "https://sims.fandom.com/wiki/Lucky_Palms?oldid=908170"
Community content is available under CC-BY-SA unless otherwise noted.