Luc Smith is a deceased Sim from Strangetown. His grave is located on Olive Specter's lot. He died by drowning. Although Luc shares the surname with the Smith family he is not related to them, as they don't have other relatives with the last name "Smith." Whether or not he is related to River Smith, a townie, is unknown, and up to the player's speculation. Oddly, Luc has the hidden Power aspiration. Despite being shown as a teenager in his thumbnail, Luc is treated by the game as an adult with 29 days left before aging up.

There are two images of him as an Adult and an Elder hidden in his character files and these pictures are quite different than the teenage Luc, with different facial structures and a different eye color. It is understandable why the Adult image is there, as Luc is recognized by the game as an adult, but it is unknown why the Elder image is there. These pictures also show his true facial structure - the 6th face template - the one he gets if he ages up or looks in a mirror.

Luc has no shirt in his adult thumbnail. He is voiced by Stephen Kearin. When editing Luc in SimPE and trying to open his DNA, the page will appear blank. He is thin but according to the game, he is supposed to be fit. Bella Goth also has this case. 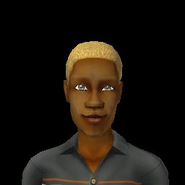 Luc with his genetic face and eye color. 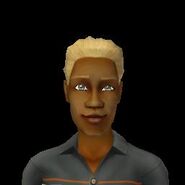 Luc's intended appearance in The Sims 2 based off of hidden images.
Add an image to this gallery

Retrieved from "https://sims.fandom.com/wiki/Luc_Smith?oldid=916404"
Community content is available under CC-BY-SA unless otherwise noted.