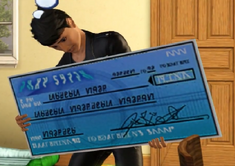 A Sim winning a lotto in The Sims 3: Into the Future.

In The Sims 3: Into the Future and The Sims 4: Seasons, the lottery (or lotto) is a competition Sims can enter which can potentially award them with a large sum of Simoleons.

The Sims 3: Into the FutureEdit

There are 8 prizes that Sims can win in the lotto. The higher the amount of the prize, the less the chance to win. The chances to win prizes of §1,000 and above are modified by the Sim's traits; the Lucky trait will increase the chance of winning, while the Unlucky trait will decrease them.

Sims who time travel to Oasis Landing can check the lotto records at the city hall. Checking the records will give the Sim an "Insider Tip" moodlet, which will greatly increase the chance to win grand prizes. Having the moodlet will also guarantee that the Sim will win the lotto draw, and will win at least §5,000.

Having the Advanced Technology skill will increase the amount of the prize. The multiplier, based on the Sim's skill level, is listed below:

This means that it's possible for a Sim to win up to §3,000,000 with a grand prize and level 10 of Advanced Technology skill.

The lottery is a surprise holiday that may pop up in a household's calendar in any season. Any Sim aged young adult or older can enter by buying a ticket from their phones or computers, which costs §100. There is a limit of one ticket per Sim, so larger households have a better chance of winning if every Sim buys a ticket. Materialistic and ambitious Sims particularly enjoy the holiday.

The winner is announced at 6 A.M. the next day, and the prize is §1,000,000. Sims who win receive a +3 dazed moodlet from being overwhelmed by their new fortune. Every eligible Sim outside of the current household is considered to have entered, including homeless townies. There is a glitch that occasionally enters stray pets into the lottery[TS4:C&D].

Retrieved from "https://sims.fandom.com/wiki/Lottery?oldid=907359"
Community content is available under CC-BY-SA unless otherwise noted.