The Sims Wiki
Register
Don't have an account?
Sign In
Advertisement
in: Premade families, Families with 3 generations, Families from The Sims 2 (base game),
and 6 more
English

Listen) family is a pre-made family first found in The Sims 2. The last living member of this family is the Pleasantview womanizer, Don Lothario, who is largely involved in the Pleasantview love web. Don Lothario is probably based on Don Baxter from early previews of the game, who had a different appearance and was still chasing after Dina. The differences were that he was married to a woman named Sarah, had a toddler son named Alex who was about to age up, and lived in a sprawling estate with a large swimming pool.[1]

Through a teleporter mishap, Don spent an unspecified amount of time in Riverview. He remembers women laughing and standing on a teleporter, and then waking up in the new town. Because of his recurring age, time travel is likely to have been involved. He seem to have been given an abandoned granary possibly owned by the McDermott Family to live in. He is wondering if he should continue his old romancer ways, and in his bio, it refers to his engagement to Cassandra Goth and romances with Dina Caliente, Nina Caliente and Kaylynn Langerak from The Sims 2.

Don's house is styled in the fashion of a 1990s bachelor's condo, with pictures of girls (including the Bella Squared painting), a hot tub and a bar. The brick walls on the first floor further adds to the feeling of a '90s condo. The game's directions upon loading the lot for the first time read as follows:

"Don's romantic life is really humming along! Maybe now's the time to put the moves on Nina Caliente. Pick up the phone to invite her over."

At the game's start, the family is set up for disaster, similar to the setup when the Pleasants are first played. The game will suggest inviting Nina over for a hot tub soak, and will shortly after suggest hiring Kaylynn to clean Don's messy house. Both Nina and Kaylynn are Don's lovers, and when they are both there with him, Don will often get caught. Usually, he will lose one of these lovers (more often he loses Kaylynn).

Although one possible gameplay sequence may hint that the scenario is set up for disaster, the "disaster" may never occur if a different sequence is followed. For example, if Don first invites Nina over for a soak in the hot tub and does a woohoo with her privately, he can ask her to leave and then clean up the mess. When he has cleaned up the first mess, the message will appear, saying that he needs to hire a maid. So, he hires a maid, which is likely to be Kaylynn. At this point, Don still has Nina and Kaylynn as his lovers. Disaster depends on how the game is played and how the situation is interpreted.

Also of note, inviting Nina over in the beginning will often result in her asking if she can bring a friend. Since she will usually bring Dina with her, this could create another bad scene if Don agrees to Nina's request.

If Don invites Cassandra over and she marries/moves in with him, instead of the other way around, she will bring with her around fifty thousand simoleons, which often leaves the player with more money then they would ever need, since Don lives in a small condo and doesn't have a lot of space for additional investments.

The males in the family all look similar, have similar personalities and Carmelo and Mama share Don's Romance aspiration.

Lothario: "A man who obsessively seduces and deceives women" or "a man who behaves selfishly in his intimate relationships with women". Lothario is also a term for any man who behaves in a way that he does and Lotario (without "h") is a first name in Italian (it's also the Italian surname of the family). The Italian name seems fitting, seeing as Don is of Italian descent (although in Italian there are no surnames with "th", a common error committed by Anglophone people). Also, the Lothario theme fits very well.
Don Lothario: A "Don Juan" is basically a synonym for Lothario. Also, Donald (which Don is a common nickname for) means "ruler of the world." Don Lothario's name seems to be very fitting of him.
Nicolo Lothario: Italian (spelled correctly: "Niccolò" or "Nicolò"), meaning "Victory of the People".
Adriana Lothario: Is an Italian name, derived from Hadria, a town in northern Italy. The town name might in turn possibly stem from an old Indo-European word "adur" meaning water or sea. Likely Maxis just thought it sounded nice.
Carmelo Lothario: Spanish and Italian masculine form of Carmel, meaning garden and named after Mt. Carmel, mentioned in the Old Testament.
Mama Lothario: Slang for an attractive woman. May also refer to the idea she is the mother or "mama" of Don's father.
Primo Fiorello: Italian name meaning "first." Also literally means "Cousin" in Spanish.
Isabella Fiorello: Italian form of Isabel or Elizabeth, in turn from Hebrew Elisheba, meaning "My God Is An Oath". Might also be tongue-in-cheek "is a beauty" in this case as per the meaning of Bella. 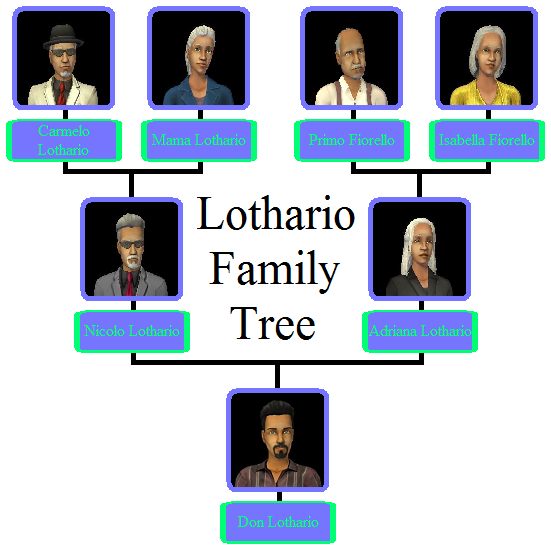 Cassandra and Don meeting each other at a bookstore

Don making out with Dina Caliente

Don with the Caliente Sisters

Don trying to get Bella Goth abducted by aliens?