The Sims Wiki
Register
Don't have an account?
Sign In
Advertisement
in: Types of lots, Lots, Architecture
English 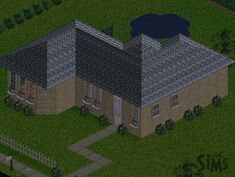 A residential lot in The Sims.

A lot is a part of a neighborhood where build mode and buy mode objects can exist.

In The Sims, Sims cannot go outside lots.

Lots are divided into residential lots where Sims live, and community lots where they can interact with other Sims. Unleashed allows players to rezone lots in the original neighborhood and Old Town, but in all other areas, a lot's status as residential or community is fixed.

In The Sims, all lots are numbered, and each lot number has a specific location. Each area uses a range of lot numbers, as follows:

A lot's location is controlled by the number in its filename. For example, House05.iff is lot 5, which is 5 Sim Lane. It is possible to place a lot in a neighborhood simply by copying its "House" file into the correct folder, and replacing the "House" file which was already there for that lot. This can be done even if a family is living on the lot, which allows a player to "drop a house" on a family.

As in The Sims, Sims cannot go outside lots in The Sims 2 but can visit some of the non-residential lots after a loading screen appears.

Some expansion packs for The Sims 2 added new lot types - such as dorms and secret societies (University), hotels and beaches (Bon Voyage) and apartments (Apartment Life).

In The Sims 2, the Lots and Houses bin contains both vacant lots and lots with pre-built structures. Lots come in a variety of sizes and range from tiny (3x1, 2x2) to huge (5x5, 5x6). The size of the lot affects its price; larger lots cost more. The actual size of the lot (in squares on the grid) is the lot size number times 10. For example, the 5x6 lot has a grid of 50 squares by 60 squares. However, the outer 2 squares on some or all sides cannot always be built on.

Lots can be placed almost anywhere there is room for them, as long as they connect to a road. If a lot cannot be placed in a spot where there appears to be room for it, it may be necessary to move or remove any neighborhood decorations that are in that spot. When placing a vacant lot, the player will be asked whether it is to be a residential lot or a community lot. Pre-built lots, whether Maxis-made or custom, are pre-zoned. Lots that are initially empty cannot be grabbed and moved or rotated with the hand tool, nor put in the bin. Any lot, however, can be bulldozed. Lots that contain gravestones/urns should not be bulldozed, as doing so can cause neighborhood corruption.

A hotel from The Sims 2: Bon Voyage

An apartment building from The Sims 2: Apartment Life

The Sims 3 allows Sims to explore areas between lots. A much broader range of lot assignments such as library and gym, alongside rabbit hole objects that affect lots, were introduced. These assignments and objects can change a lot's properties.

Lots in a world can be added, moved, or deleted in edit town. New lots from the Lots and Houses bin must be placed on empty lots of the same or larger size. If a houseboat is placed on a landlocked lot, only a deck with a cellar will be built. Lots no longer need to be placed next to roads, and can be placed on any routable terrain. Empty can also be rotated in any direction instead of being limited to 90 degree angles. Holding down the ⎇ Alt key allows for more precise angling. Lots that have been built on are restricted to 90 degree rotations.

The Sims 4 does not include the open world aspect of The Sims 3, so visiting other lots will again bring up a loading screen, much like The Sims and The Sims 2. However, community lots and residential lots can be visited at any time. The neighborhoods around the lots are "open" and can be explored freely.

Because neighborhoods have a fixed number of lots available in them, much like The Sims, lots cannot be added or removed, but can be bulldozed to make a lot vacant.

Sylvan Glade, which is a Secret lot
Français Português do Brasil Русский
Community content is available under CC-BY-SA unless otherwise noted.
Advertisement