The Sims Wiki
Register
Don't have an account?
Sign In
Advertisement
in: Sims, Female Sims, Young adults,
and 28 more
English

Lolita Goth is a pre-made deceased Sim from The Sims 3, who is a possible member of the Goth family, however, her link to them is unknown. Her tombstone is located in the family graveyard on their lot in Sunset Valley, where her ghost also haunts them. According to her ghost, she died of electrocution. She has a small tombstone.

Her exact relationship to the rest of the Goth family is unknown, since she does not appear in the family tree, and was never mentioned in any previous The Sims games. 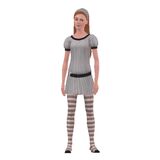 Mortimer chatting with the spirit of Lolita Goth

Lolita's ghost and a grave

Lolita with a book

Lolita Goth glances at the camera

Lolita's appearance when she was alive