The Sims Wiki
Register
Don't have an account?
Sign In
Advertisement
in: Lots, Residential lots, Lots with 2 floors,
and 6 more
English

This is a list of all the empty houses and lots of Neighborhood 1, from The Sims.

2 Sim Lane is a large lot with an unoccupied mansion. This is the largest, most expensive house that comes with the base version of the game, though 1 Sim Lane in Neighborhood 2 from Livin' Large is roughly twice as expensive. The bottom story has an entrance hall/stairway, one small room with "Deep Jade" ceramic tile flooring and matching "Deep Jade" walls, probably meant to be a bathroom, and 3 large rooms of indeterminate purpose with different flooring patterns (1 hardwood, 1 tile, 1 carpet). Two of these large rooms feature fireplace of different types (Library Edition for the tiled room and Worcestershire for the carpeted room). The top story likewise consists of a central hallway, one small room, and three large rooms; unlike the bottom story, however, the three large rooms on the top story all have the same carpeting, indicating that they are the same kind of room (commonly assumed to be bedrooms). Two of the three large rooms each have a balcony attached. Interestingly, one of the rooms on the bottom story shares the same "Royal Blue" carpeting as the three large rooms on the top story, suggesting that this is a four-bedroom house. Also unlike the bottom story, the small room on the top story uses the "Hedman Herringbone Hardwood" flooring, which the tooltip calls "perfect for a dance floor", and the "Shooting Stars" wallpaper, said to "Over-stimulate a young one's imagination". It is therefore not likely that the developers intended this room to be a bathroom, though it could be used for that. The backyard consists of a large swimming pool, which is unique for containing an island with flowers and a willow tree on it. However, as the island is designed, there is no way to water the flowers unless a) the move_objects cheat code is used to move a Sim to and from the island, b) a Sim with magic has learned the Teleport ability from a purple Crystal Clear Ability Rock[TS:MM], c) a Sim with magic creates a Perfect Garden charm[TS:MM] or d) a custom content sprinkler system is used.

A view from the front of 2 Sim Lane, with the walls down.

A front view of the 2nd floor of 2 Sim Lane, with the walls down.

The swimming pool of 2 Sim Lane.

3 Sim Lane is a medium-sized lot with an unoccupied 1 bathroom, 1 bedroom house. The first floor contains three rooms. The one that connects to the front door has a complex pattern of large tiles on the floor, suggesting that it is meant to be a combination kitchen and dining area. A second room is small with small square green tiles on the floor, and is probably meant to be a bathroom. The third room is carpeted and has a fireplace; its size and relative isolation (sims can get from any part of this house to any other part, including the front door, without going through this room) make it the only room in the house suitable for use as a bedroom. The second floor has no rooms to speak of, consisting only of a large hallway granting access to two balconies. Things that would ordinarily go in the living room, particularly those that make noise, are best placed in this hallway.

Due to its price tag, no family can be moved into this house immediately. However, because the bedroom is large enough to accommodate beds for four people, and because 6 Sim Lane and 10 Sim Lane are both too small, it makes a decent "upgrade" house for the Pleasant family.

The European variant lacks the wooden fences, has a New Amsterdam brick finish, and terracotta rooftops. Traffic lines are also absent from the street. The front door is a Windsor style door instead of a Federal Lattice door.

The Asian variant is mostly identical to the North American version, except for the lack of traffic lines on the street. 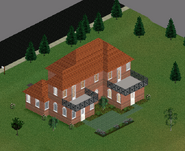 A view from the back of 3 Sim Lane, European version.

A view from the front of 3 Sim Lane, European version.

6 Sim Lane is a small lot with a 3-room starter house. It is the only starter house that is furnished but not occupied. The house has one bathroom and one bedroom; the bathroom can be reached from the bedroom or the front living/dining area. The bedroom also has a door which opens onto a patio. The front room can serve as a combination living room, dining area, and kitchen, or the player can have the resident(s) dine on the patio. The kitchen/living room features two cheap kitchen counters, a sink, a refrigerator, a trash bin, and a lamp. There are no appliances for cooking food, no entertainment, and no seating. The bathroom has a toilet, a shower and a lamp, but no sink. Sims will often wash their hands in the kitchen sink after using the toilet. The bedroom has only a single bed and a lamp.

Players often tend to move Michael Bachelor into this house, since there is bed space for only one person and he is the only single-Sim family to come with the game. It should be noted that the kitchen/living room is unsuitable for larger dining tables due to space issues.

The European variant had terracotta style rooftops and no traffic lines on the street. The Asian version had Japanese-style wall finishings on the exterior, and also lacked the traffic lines.

A view from the front of 6 Sim Lane, with the walls down.

A view from the back of 6 Sim Lane, with the walls down.

A view from the front of 6 Sim Lane, with the walls up and roof visible.

A view from the back of 6 Sim Lane, with the walls up and roof visible.

Another view of the back of 6 Sim Lane, showing the patio.

10 Sim Lane is a small-sized lot in with an unoccupied four-room starter house. The front door connects to a very small carpeted room that is not suitable for use as anything but a living room. The central room is small with bathroom-style tiles, and is probably intended to be used as a bathroom. The largest room is divided into two areas with different floor patterns; one half (which connects to the back door) is tiled, and therefore probably intended to be a kitchen, leaving the carpeted half as the dining room. However, the carpeted half also has a fireplace, suggesting that it could be a second living room and that the tiled half should double as a dining area. The fourth room is the only one that is neither tiled nor connected to the front or back doors, making it the probable bedroom. The house's size - large enough for two people but too small for four - makes it ideally suited for the Roomies family, though any family could be moved in.

The European version used New Amsterdam brick finishings on the exterior, terracotta rooftops, and no traffic lines on the street. The front door is a Windsor style door instead of a Federal Lattice door.

The Asian version used Japanese-style wall finishing on the exterior and lacked traffic lines on the street.

A view from the back of 10 Sim Lane, European version.

A view from the front of 10 Sim Lane, European version.