An Easter egg is a message hidden in the object code of a program, movie, book, CD, DVD, or video game as a joke, intended to be found by persons disassembling or browsing the code. 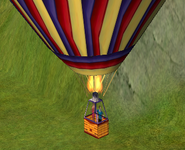 Bella and somebody standing in the hot air balloon

Hidden picture from The Sims 2, discovered by Numenor

The spaceship with the searchlight

The Urbz: Sims in the CityEdit

References to EA and other EA titlesEdit

Homages to art, film, and literatureEdit

The Sims 4: Get to WorkEdit

The reappearing llama reference is an old joke from Maxis dating all the way back to SimCity 2000, when the speed names were "Pause", "Turtle", "Llama", "Cheetah", "African Swallow". Llamas appear throughout most games of The Sims series.

View past articles · Vote on future Featured Articles · Other Featured Content
Retrieved from "https://sims.fandom.com/wiki/List_of_Easter_eggs_in_The_Sims?oldid=923086"
Community content is available under CC-BY-SA unless otherwise noted.