Lilith Vatore is a pre-made vampire who resides in Forgotten Hollow, the world introduced in The Sims 4: Vampires. She lives together with her brother Caleb Vatore.

Lilith is a young adult who is unemployed and has not learned any skills. Both Lilith and Caleb want to be good vampires and dislike drinking plasma from other Sims, which makes the grand vampire Vladislaus Straud quite angry. Even though Lilith's family bio implies that she may be in a negative relationship with Vladislaus, she doesn't know him at the start of the game.

In one of the trailers trailer for Vampires, her name was shown as "Gina" instead of Lilith.[1] The trailer also reveals that she was turned into a vampire by Vladislaus Straud.

The name Lilith is of Assyrian or Sumerian origin, and refers to a Mesopotamian storm goddess or the demon of the night in Jewish mythology. Her aspiration may be a reference to her title as "mother of demons". 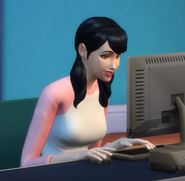 Lilith before she was turned into a vampire, from the official vampire powers trailer.

Count Vlad about to bite and transform Lilith.

Lilith Vatore CAS
Add an image to this gallery

Retrieved from "https://sims.fandom.com/wiki/Lilith_Vatore?oldid=939336"
Community content is available under CC-BY-SA unless otherwise noted.