The Sims Wiki
Register
Don't have an account?
Sign In
Advertisement
in: Sims, Male Sims, Teens,
and 22 more
English

Lil Bling is a pre-made one-star celebrity male teen sim featured in Bridgeport, the neighborhood which is introduced in The Sims 3: Late Night expansion pack. Lil is the only teen who has celebrity status in the game. He lives in a large house with Big Hartley, Tom Wordy, a well known composer and celebrity, and Tom's lover, Sugar Bijou. Lil Bling appears to be an apprentice/sidekick of sorts under Tom's guidance, and he hopes to follow Tom's footsteps towards his own successful music career.

He loves playing piano and has already 5 skill points in it. He is good friends with Katelyn Missoni and Tom Wordy; friends with Big Hartley; and acquaintances with Lala Angelista, and dislikes Sugar Bijou. Lil's glasses hide the freckles he has. His bio states that he has previously lived in Twinbrook. 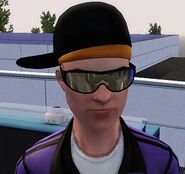