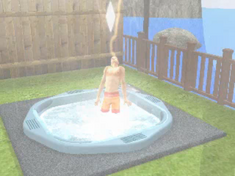 A Sim getting struck by lightning

Lightning is a weather phase in The Sims 2: Seasons, The Sims 3: Seasons and The Sims 4: Seasons during heavy storms.

It also constantly appears in the dystopian future of Oasis Landing in The Sims 3: Into the Future.

Lightning can be distant, nearby, or local. Distant lightning will be marked by thunder, but there may not be a flash. With a nearby strike, there will be a flash, which may be intense, and the thunder may be louder, but the lot will not be affected. With a local strike, a bolt of lightning actually hits something (or someone) on the lot.

If a Sim is outside there is a possibility they will get hit. A Sim who is on the lot as a walkby can be hit, even if they have not been greeted. Lightning can also be attracted to a lightning conductor, like a hot tub or a hot spring. Sims soaking in one of these during a storm will be hit by lightning very frequently. It is also very likely that after getting hit while in the hot tub, the Sim will also be struck by lightning as soon as they step out of the hot tub, resulting in near instant death.

For most Sims, getting hit by lightning is a fear, but for Knowledge Sims, it is often a want.

In Seasons patch, Maxis made the lightning less deadly. However, it can still kill a Sim.

Players can buy a lightning rod, the EZ120v Lightning Finial, which is found in the Decorative section of buy mode. It can be placed on the ground or on a roof, and tends to attract lightning. If a lightning rod is present, lightning may still strike a tree, or a building, or a Sim, but it's more likely to strike the rod.

Lightning can also cause a ghost to appear if there is a gravestone on the lot. The grave will be struck by a blue rod of lightning and the ghost will leave his/her grave, even during daytime hours.

Lightning is present in heavy thunderstorms that commonly occur in spring, summer and occasionally autumn. As in The Sims 2: Seasons, lightning can kill a Sim, however it is extremely rare and will require a Sim to either be struck twice or to be singed. Death by lightning in The Sims 3 is treated as death by electrocution.

Lightning is a returning weather phase in The Sims 4: Seasons. Sims that get struck by lightning will receive +40 Dazed moodlet. After getting struck once. After the second time they get struck, they will gain the ability to summon lightning anywhere they choose, However if a sim get struck by lightning too many times, they will die from electrocution (This is Rare). Sims who are outdoors during a thunderstorm will become scared and will autonomously attempt run indoors. Even when indoors, Sims will receive a weaker scared moodlet for the duration of the storm. The Scared Moodlet can be changed to a happy moodlet if a sim has the Storm Chaser Trait From The Rewards Store.

A Sim getting struck while using an evil kite in The Sims 2: Open for Business.

Lightning in The Sims 4: Seasons.
Community content is available under CC-BY-SA unless otherwise noted.
Advertisement