When Sims die, they become ghosts (you think I was born yesterday? We all know that!). In Livin' Large, pleading with the Grim Reaper may result in him bringing a recently deceased Sim back as a zombie. If Unleashed is also installed, these zombies can be restored by Miss Lucille, who can be found on community lots in Old Town, though she cannot restore their personalities. Also in Livin' Large, Sims using the chemistry set might make a purple potion that can temporarily turn a Sim into a monster. 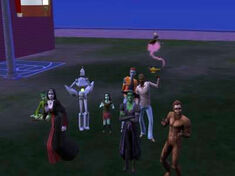 Only the Normal Sim life state was initially included in The Sims 4, but a patch reintroduced the ghost life state. With Get to Work, aliens were made available in Create a Sim for the first time in the series. In Cool Kitchen Stuff, Sims can obtain the appearance of a PlantSim by eating Plant Matter ice cream; however, the effects are only temporary. With Patch 49, PlantSims were properly added in with improvements, albeit still being a temporary state. With Vampires, vampires were made available in Create a Sim along with customizable vampire features and new powers. In Jungle Adventure, skeletons were introduced as a temporary life state with some special abilities.

Retrieved from "https://sims.fandom.com/wiki/Life_state?oldid=841959"
Community content is available under CC-BY-SA unless otherwise noted.