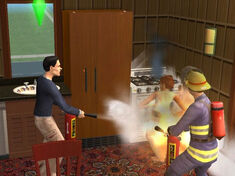 A Sim can put out a fire more effectively after learning the fire prevention life skill.

Life skills were introduced in The Sims 2: FreeTime and The Sims 2: Apartment Life. They are skills that a Sim can learn to unlock special interactions or abilities. Unlike other skills, they are not learned incrementally. A Sim will not have a life skill, nor will they fulfill any wants to obtain a life skill, until he or she has learned it completely.

This skill can be learned by reading a book from any bookcase. Once learned, it allows a Sim to "check" on babies. A thought bubble will appear indicating any motives needing attention. The symbols for hunger, bladder, and so forth are the same as they are when older Sims need something and begin waving at the player.

Knowledge and Family Sims will often roll a want to learn this skill after having a baby.

Sims with this skill are more effective at putting out fires, and are calmer when a fire actually starts. From a player's perspective, it is easier to get them to move away from the fire.

Reduces the chance of becoming furious with another Sim. When Sims with this skill do get furious, they may get over it faster, and the relationship damage is less.

When a Sim has learned this skill, his or her aspiration level will take much longer to decay.

Sims with this skill build body skill faster, gain fitness faster and lose it slower, and lose energy more slowly. This skill was bugged in the initial release of Apartment Life, so that Sims who learnt it would learn body skill instantly, as well as any skills practiced after body. The bug was fixed in the Apartment Life patch, but then broken again in Mansion and Garden Stuff. Several mods fix this bug, such as M&G Physiology Fix from Mod The Sims and alfixes mod from More Awesome Than You. These two mods conflict, so use either one of them.