Lazlo Curious is the youngest son of Glarn Curious and Kitty Curious. He has long black hair, wears green shaded glasses, a purple shirt, blue-grey jeans and sandals. He has the same shirt as David Bennett.

He has a crush on Crystal Vu, a Strangetown townie. However, if Nightlife or later is installed, their chemistry may be poor because their astrological signs do not match. He works in the Science career track. When first played, he is 28 days from being an elder.

He's more relaxed and easy-going than Pascal and Vidcund, which is why he usually isn't involved in their rivalry with Loki Beaker. The relative lack of bad feeling between the two may also be due to the fact that, unlike his brothers, Lazlo has no known romantic history with Loki's wife, Circe. His career level is also higher than his brothers (both Pascal and Vidcund are Lab Assistants while Lazlo, despite being the youngest of the three, is already a Field Researcher). While Lazlo's biography says that he has a degree in Phrenology, technically he doesn't have any degree even if The Sims 2: University is installed. In addition, there isn't a Phrenology major in that expansion pack.

In The Sims 2 for PSP, Lazlo is suspected of kidnapping Pascal's son, Tycho Curious, alongside Vidcund. The player has the choice of questioning and intimidating either Lazlo or Vidcund, but Lazlo is the innocent suspect.

Lazlo's secrets from The Sims 2 (PSP): 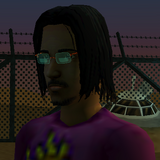 Retrieved from "https://sims.fandom.com/wiki/Lazlo_Curious?oldid=941370"
Community content is available under CC-BY-SA unless otherwise noted.