The Sims Wiki
Register
Don't have an account?
Sign In
Advertisement
in: Careers, The Sims, The Sims 2,
and 4 more
English 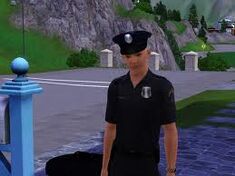 The law enforcement career is a base game career track featured in the The Sims, The Sims 2 and The Sims 3. It is also included in The Sims 4: Get to Work (where it is renamed to "detective") and The Sims FreePlay as an active career.

Of the ten career tracks that shipped with the base game, Law Enforcement had the second-highest pay at rank 1 and the second-lowest at rank 10, following a very similar pay curve to the Military and Politics career tracks. Its pay curve is also bent slightly upward, with bigger pay differences between the lower ranks than the higher ones. Requiring an average number of friends to reach rank 10, it is neither especially difficult nor especially easy to progress through. It is unique among all career tracks in that its rank 10 job is not a job at all, but a specific character: Captain Hero, also known as Maxis Man or SuperSim, a flying superhero from the Simcity games who would sometimes show up to fight disasters. Captain Hero is also the name of a character from the animated TV series Drawn Together.

Law is a career track in The Sims 2 (console), which is similar to the Law Enforcement career in other games in the series.

Law is one of the career tracks available in The Sims 2: Pets (console).

After the 5th level promotion, the player is given a choice between the two branches: Special Agent or Forensic Analyst. The big difference is in the Bonus actions that each branch gives, as the difference in the pay is lessened because the Special Agents end with a bigger pay per hour, but the Forensic Analysts have one more hour of work per day. International Super Spies can Raid the Criminal Warehouse, whilst Dynamic DNA Profilers can run Forensic Analyses, which play out like Hacking.