Listen) family is a pre-made family appearing in both The Sims 2 and The Sims 3. In The Sims 2 only Kaylynn Langerak appeared in-game, and she has no members in her family tree. However, in The Sims 3, she has a father named Dustin Langerak, a mother named Iliana Langerak, a brother named Parker Langerak, and her aunt named Zelda Mae who recently moved in. They live as the neighbors and good friends of the Bunch family.

In Lunar Lakes, Arthur Langerak, a descendant of the Langerak family, makes an appearance. He is engaged to Gloria Goode and has been trying to provide her with a good life. 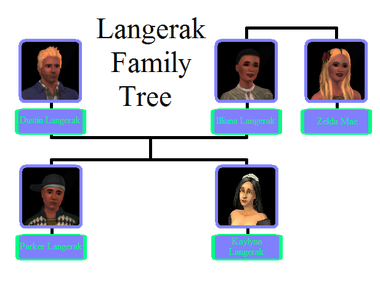 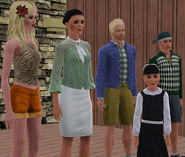 Iliana Langerak and Zelda Mae
Add an image to this gallery

"Modern and roomy with a warm interior. Sun-baked tile lines the entire ground floor, inside and out. Four bedrooms including an in-law unit downstairs and a master suite with a private balcony upstairs. Long back patio with pool."

Retrieved from "https://sims.fandom.com/wiki/Langerak_family?oldid=938768"
Community content is available under CC-BY-SA unless otherwise noted.