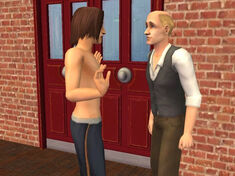 The Landlord is an NPC that came with The Sims 2: Apartment Life and The Sims 4: City Living. Their job is to maintain the communal living space of the apartment and collect rent from tenants.

One of the villains in The Urbz: Sims in the City, Harry Snivel is also the player's landlord and repo-man. As the player's reputation rises and the other apartments are unlocked, the rent that the player must pay increases. Refusal to pay the rent first time will have him come to the apartment to give the player a second chance to pay. If the player again refuses to pay, he will repossess some items in order to cover the bill. A larger bill cannot be evaded by having the player live in the first apartment when all three are unlocked.

Landlords will come every day to do the gardening and clean the outdoors. They will also throw an apartment party every Saturday, where they order pizza (or grill if a barbeque is present in a communal area), while other neighbors socialize.

The landlord replaces the repairman and exterminator services; if there are broken objects or roaches on the lot, an option will appear on the telephone allowing Sims to request the landlord's services. They also replace the gardener service as landlords will tend to all plants and tree regardless of whether the plant is indoors, outdoors or in the sims outdoor apartment area such as a balcony or backyard.

If a Sim has a high enough relationship with the landlord, there is a good chance that their rent will be reduced.

Landlords can marry and move in with a Sim. They will be replaced by a new Landlord if that happens.

The pre-made landlords are the same for every neighborhood, but they will have randomly assigned names in each game.

In The Sims 4: City Living, landlords are NPCs who are in charge of the apartment building. Unlike The Sims 2: Apartment Life, they don't normally hang out in communal areas and they don't come to collect rent personally.

Landlords replace the repairman. Sims can call landlords to help with things such as clearing out pests, repairing, broken objects, and fixing plumbing or faulty electrical wires. A Sim who has a good relationship with the landlord will have them wanting to fix broken objects more frequently. If the landlord is called too often, they will refuse to fix whatever problems are in the apartment.

Unlike in The Sims 2: Apartment Life, landlords are usually randomly selected townies and are not pre-made NPCs. If a landlord is deleted, they will be replaced by a new one.

Português do Brasil
Community content is available under CC-BY-SA unless otherwise noted.
Advertisement