The Laganaphyllis simnovorii (commonly known as the Cowplant or Cow Plant) is a partly carnivorous bovine form of vegetation that is large enough to swallow a Sim whole.

It first appeared as the career reward for the Natural Science career in The Sims 2: University. A vagely similar plant, simply called the "mutant plant", appeared in The Sims Bustin' Out for console.

On December 22, 2011, the Cowplant was made available from The Sims 3 Store as premium content in the Killer Classics set; it also returns in The Sims 4, where it becomes a plant that must be grown. The Cowplant was added to The Sims Social on Halloween 2011, where it was sold for 500 Social Points.

This bizarre bovine vegetation is large enough to swallow your next-door neighbor whole. In fact, it WILL eat your neighbors. Your friends will be hard-pressed to resist the tantalizing vine-cake of the carnivorous [sic] Laganaphyllis Simnovorii. After it has consumed some prey, milk it for sweet, rejuvenating nectar of life. A swig of this liquid refreshment will add precious days to a Sim's life and wash away any regret they may have over their visitor's fate.

Note
If Open for Business is installed, the Cowplant can eat a Servo. This is one of the few ways in which a Servo can die.

A Cowplant can be fed by clicking on it and selecting "Feed". When this is done, the Sim will take out a Leg 'O' Lamb, which costs §35, and throw it to the plant; sometimes playing with it or teasing it first. This action is not autonomous. Household Sims will ignore the plant unless it consumes someone or the player directs them to interact with it.

Not being fed does not appear to have any negative effects on the Cowplant. However, it will attempt to capture and eat Sims if not fed every in-game 12 hours. The Cowplant will stick out its tongue, which contains a slice of cake, luring an unwary Sim close to the plant. It then devours the Sim, who dies immediately. Unusually, the Grim Reaper does not appear; the Cowplant simply spits out the grave. The Sim's ghost will be green.

Sims can be ordered to "Grab Cake", and will die if not stopped. However, the Cowplant will not eat Sims who stink due to low hygiene, even if they were told to take the cake.[n 1] Ungreeted walkbys will ignore the plant, as will most service NPCs who are on the job. However, service Sims such as nannies who have idle time during their work day may be drawn to the Cowplant during that idle time. Since a locked gate may not stop service Sims such as a nanny, it may be a good idea to feed the Cowplant before they arrive.

After a Cowplant has eaten a sim, members of the owner's household can milk the plant. The "milk" is actually a life-extending drink similar to the Elixir of Life, extending the Sim's lifespan by five days. Unlike the Elixir of Life, children can drink it. Drinking the "milk" is sometimes referred to as drinking that Sim, and doing it gives the drinker a special memory. Sims may have a want to "drink" a certain Sim that they are unhappy with. A Sim still can be resurrected if the cow been milked.

Toddlers cannot interact with the Cowplant. Children cannot take the vine-cake that the Cowplant offers, but may be able to play with it and milk it.

Our fan favorite Laganaphyllis Simnovorii returns, as diabolically fun as you remember and with new gameplay you'll never forget! A swig of the milk of the Cow Plant adds days to your Sims' lives and washes away any regret you may have at the fate of the unsuspecting Sim from whom its created. Feed it, pet it, play with it, give it a treat, praise it and scold it to create a loving pet, or a ruthless henchman, the choice is yours, and the fate of your friends and neighbors is yours too.

In The Sims 3, the Laganaphyllis Simnovorii can be bought as a premium content item as part of the Killer Classics set from The Sims 3 Store for 600 SimPoints. In-game, the plant costs 475 simoleons.

Once eaten, a Sim will die, although the plant will often spit the Sim back out if they have bad hygiene, or has the Good, Lucky, Unlucky, Brave or Daredevil traits. The Cowplant will not eat babies, toddlers, children or imaginary friends that are turned real, but will eat teenagers and older. If the Sim does die, their ghost will be purple, as if they had starved. Unlike The Sims 2: University, the Grim Reaper will always come for these types of deaths.

After a Cowplant has eaten a Sim, other Sims can choose to praise or scold it. They can milk the cow plant which will reset them to day one of their current life stage, and will give them the "Divine Meal" moodlet with +75 mood for 7 days. If the Cowplant is not fed for a week, it will die of starvation and Sims can clean it up. With Showtime, Sims can choose to throw a mini Cowplant at the stage; this will cost §475.

If Supernatural is installed, the cowplant may eat Bonehilda, but she will usually be spat out afterwards. Sometimes she may become a ghost.

As in The Sims 2, toddlers cannot interact with the Cowplant, while children are able to play with it, milk it and eat the cake, they are always spat out.

A statue of a cowplant can be purchased for the same price of the actual product. The player can also buy Cow Plant themed Spring Rides or Arcade Machines. There is also an option to dress up as a Cow Plant during Spooky Day.

This Galactic marvel makes an excellent source of food, cuddles and lifelong friendship. Become the envy of the Neighborhood! Just remember to feed it.

The Cowplant returns in the fourth installment of the series with some changes. Rather than being unlocked as a career reward or purchased as an item, the Cowplant is now obtained by collecting a rare berry, which can be planted in a garden or sold for §900. Also, the Cowplant no longer appears in a pot, unless it's placed indoors. As of patch 99, Cowplants can be named.

Cowplants in The Sims 4 now have three different growth states, and can die.

As in previous games, Sims feed the Cowplant meat, and a hungry Cowplant uses a cake to attract Sims so it can eat them. A Cowplant can only be fed when its tongue sticks out and the cake is visible.

When a Sim is eaten for the first time, the Cowplant will spit them out, and they will receive the Drained moodlet, saying that the Sim "feels like an emotionless shell." This negative moodlet will last two days. If a Sim with this moodlet attempts to eat the cake, the Cowplant will devour them. When this happens, the Grim Reaper will come and confront the Cowplant before checking his list. A gravestone of the dead Sim will appear, and the Reaper will then leave. The ghost of a Sim eaten by the Cowplant will make plants grow when happy but kill them when in a bad mood.

When a Sim is devoured, a notification will pop up: "(Sim name) is being devoured by a cow plant! Will he/she make it out alive?!"

As in previous games, a Cowplant that has successfully devoured a Sim can be milked. Milking a Cowplant yields a drink called "Essence of Life", which adds extra days to the Sim's life and instantly makes them happy.

Sims who survive being eaten by the Cowplant can milk it and receive a potion which will give them the emotions they had before being eaten. The name of the potion will be "(Sim name)'s potion of (emotion that Sim was in)".

In The Sims 4: Paranormal Stuff, a minature cowplant can be bought from the catelog as a decoration. It sways just like normal cowplants, but doesn't need to be fed and doesn't die. Sims can also name it. 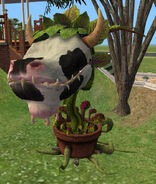 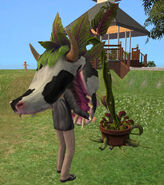 The Cowplant eating a Sim

A Cowplant with its vine-cake lure extended

Cowplant in The Sims 3

Cowplant with the Grim Reaper 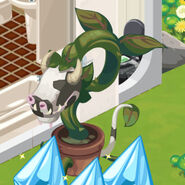 Cowplant in The Sims Social 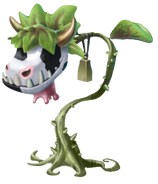 Render of the Cowplant in The Sims 4 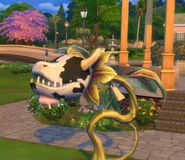 A Cowplant in The Sims 4

A Cowplant and the Grim Reaper

In-game Cowplant in The Sims 4

Cowplant in pot when inside

Cowplant dragging a Sim into its mouth 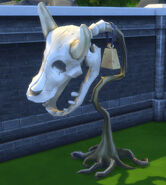 A Dead Cowplant in The Sims 4

A Cowplant spitting out a Sim.

A Sim drinking another Sim's Essence Of Life after milking his Cowplant.

The Essence Of Life Moodlet
Add an image to this gallery

Retrieved from "https://sims.fandom.com/wiki/Laganaphyllis_simnovorii?oldid=944404"
Community content is available under CC-BY-SA unless otherwise noted.