The Kraken swimming under a boat, ready to attack.

The Kraken is a huge monster that lives underwater in the ocean in The Sims 3: Island Paradise. It is a reference to the legendary sea monsters called Kraken. Sims may encounter the Kraken in the ocean. The Kraken doesn't appear often but if Sims stay in a small boat too long, there is a 4% chance of seeing it. If a Sim has the "Friend of the Kraken" lifetime reward, they can click on an idling boat aside from houseboats and select "Release the Kraken!". The Kraken will shortly afterwards attack the boat. After this is done, the Kraken will require rest before it is commanded again. They may also see the Kraken near their houseboat if it's far from land. Kraken's attacks aren't life-threatening, but they will destroy boats.

There's a 1% chance that Sims might be attacked by the Kraken. The chance is increased by additional +1% if the Kraken has swum by a boat, the boat is nearby a hidden island, or during a heavy rain[TS3:S]. Technically, the Kraken can only appear in a world where the ocean is deep enough, such as Isla Paradiso. It's worth noting that worlds in The Sims 3 mostly have shallow ocean, so the Kraken may not appear. However it can sometimes appear in Sunset Valley or Lucky Palms if the player looks far enough out into the water.

Kraken under a houseboat!

The Kraken under a rowboat 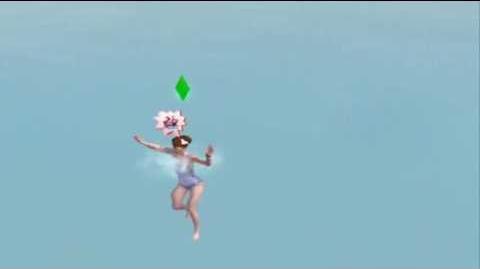