The Koffi Household lives in Sunset Valley. It consists of only Gobias Koffi , but Gobias has a deceased father named Gaylord Koffi residing in the town cemetery.

Gobias lives alone, and is fairly isolated from any kind of neighbor: the house next door is empty, cul-de-sac street in front of his house is deserted, the Wolff family and Working Friends household live a driving distance down the road on both sides, while the Frio brothers are a running/driving distance up the block.

Koffi: Variant of a masculine Akan/Western African name "Kofi" meaning "born on Friday" in Akan.
Gaylord: From an English surname which was derived from Old French gaillard "high-spirited, boistrous". This name was rarely used after the mid-20th century, when the word gay acquired the slang meaning "homosexual".
Gobias: Not a real name, but very similar to the name "Tobias". Gobias Koffi's name is a reference to the actor David Cross' character, Tobias, on the cancelled FOX show Arrested Development. In season 1 of the series, Tobias and his brother-in-law, Gob, decide to start a business, and come up with the name "Gobias... as in 'go buy us a cup of coffee'", hence Gobias Koffi. Tobias's homosexual tendencies and verbal double-entendres cause his sexuality to be called into question throughout the series. Gobias' sexual orientation is unknown. Gobias also shares Tobias' Never-Nude trait (a term coined by the show's writers to describe Tobias's fear of nudity) and he bears a physical resemblance to David Cross, the actor who portrays Tobias in the series. 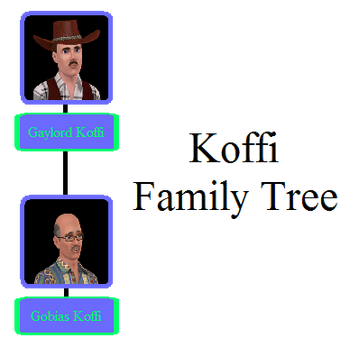 Gobias fishing
Add an image to this gallery

"Modern living at the beach, this unique home with its indoor/outdoor pool, extensive exterior living space, and dramatic octagonal bedroom is a must have for the single Sim with too much disposable income."

Add an image to this gallery
Retrieved from "https://sims.fandom.com/wiki/Koffi_family?oldid=852108"
Community content is available under CC-BY-SA unless otherwise noted.