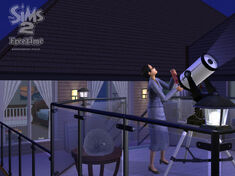 Knowledge is an Aspiration in The Sims 2. Knowledge Sims are full of curiosity and always want to learn more and more. This frequently shows up in wants to learn skills, but they also want to learn things that allow them to do things such as discover secret vacation lots.[TS2:BV]

Knowledge Sims' curiosity makes them relatively fearless. While other Sims fear things such as seeing ghosts, becoming an occult life state, and being abducted by aliens, Knowledge Sims often want these experiences. They may even want to get struck by lightning.[TS2:S][1] They also like to encounter near-death experiences, such as being saved from death. Teenage Sims are eager to have good grades at school, and young adult Sims always want to be serious in their studies at college.[TS2:U]