Kent Capp is a pre-made playable Sim in Veronaville, in The Sims 2. He is in the family bin at the start of the game.

Kent lives with one of his sisters, Regan Capp and his brother-in-law Cornwall Capp. He also has two other siblings, Goneril Capp and Cordelia Capp (who is dead). He is considered the "black sheep" of the family, according to his biography, and loves knowledge more than the fortune. He is friends with Juliette Capp (his niece) and Titania Summerdream. He is also friends with Bianca Monty against his family's wishes. He is enemies with Patrizio Monty and Isabella Monty.

Despite the Maxis storyline pointing toward Kent becoming involved with Bianca Monty, an examination through an external tool such as InSimenator or SimPE reveals the he starts the game with a slight preference for males; 0.1 for males and 0.0 for females. Titania has a crush on him but the feeling isn't mutual.

Kent has high Cooking, Logic and Cleaning skills when the player first plays the family. If he joins the Science career by using computer, he will most likely start as an Inventor, which is sixth job level of Science. If he does join that career, he has enough skills and friendships to reach level 8. When the family is first played, Kent is 28 days from becoming an elder.

Despite his father's memories placing him as Consort and Contessa's third child, the family tree in Veronaville names him as their youngest, with Cordelia as the eldest. Kent has no memories of his family, unlike most pre-made Sims. Rather, he has the default memory of a CAS-created Sim. It's possible these inconsistencies are due to Kent being a recreation of an earlier version of himself. Though the original character file has been deleted, the relationships Sims had with the original Kent are still intact when the neighborhood is viewed with SimPE.

When editing in SimPE, Kent's zodiac sign is not recognized. This happens with all the Veronaville Sims who start in the family bin, which could explain why none of them have mismatched signs like the ones who are already living in the neighborhood.

A younger version of his family appears in The Sims 3 Store World, Roaring Heights. His two older siblings, Goneril and Regan are respectively, a Child and Toddler. Kent is presumably Contessa's unborn baby at the start of the game.

The Earl of Kent was a character in Shakespeare's King Lear. He was one of the only people to see through Goneril and Regan's false affection toward their father. 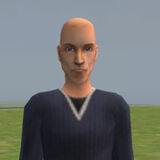