The Sims Wiki
Register
Don't have an account?
Sign In
Advertisement
in: Sims who have mastered a skill, Sims with mismatched sign, Sims,
and 35 more
English

Listen  /ˈkeɪlɪn ˈlænɡɑr.ˈæk/) is one of the pre-created Sims featured in The Sims 2 and The Sims 3. In The Sims 2, she resides in Pleasantview and works as a maid. In The Sims 3, she is a child residing in Sunset Valley, where her family ties are revealed.

In The Sims 3, Kaylynn is a child, and has 3 days left before she becomes a teen. Kaylynn lives in Sunset Valley with her parents, Dustin and Iliana Langerak, her older brother, Parker, and her maternal aunt, Zelda Mae. She loves to clean, which may explain why she later becomes a maid for the Pleasant family in The Sims 2. Her family bio states she cleans up all of the sloppy Parker's messes, and since her aunt arrived with all her plants she has to clean more than ever. She starts with four points in Painting.

Kaylynn has two continuity errors. In The Sims 3, Kaylynn is several days older than Mortimer. This would not make sense in The Sims 2, as she would have been an elder. If she were the same age as Cassandra Goth in Pleasantview, she wouldn't have been born in Sunset Valley yet. This is most likely an oversight by the developers, but an in-universe explanation could be that she had access to the Elixir of Life at some point in her life. She also has dark brown, almost black, eyes as a child in The Sims 3, but green eyes as an adult in The Sims 2.

By the time the storyline has caught to The Sims 2, Kaylynn's family is probably deceased and she is one of three maids for hire in Pleasantview; the other two are Lucy Hanby and Remington Harris, all three of whom also appear in custom neighborhoods. She has the Family aspiration and her zodiac sign is Aquarius.

Kaylynn has tanned skin, green eyes, and long black hair. She uses mocha lipstick. Kaylynn's natural hair color is blonde.[1] This can also be seen through SimPE, and if she has a child they will likely be blonde. Like all female maids, her default outfit is the typical "French Maid" outfit.

Kaylynn has romantic relationships with two men, each without the other's knowledge. Although Don Lothario has three other lovers besides her, it looks like she is his favorite because he has the highest relationship with her. He had two types of WooHoo with her: Service WooHoo and Public WooHoo. For the first time, Don's request for Public WooHoo was rejected by Kaylynn but she later agreed.

Kaylynn is also romantically involved with the married Daniel Pleasant. He is having an affair with her because his wife, Mary-Sue Pleasant, is implied to be a workaholic and doesn't have time to pay attention to him, being romantically cold to him. It's up to the player whether to continue the relationship while Mary-Sue is at work.

When the Pleasant family is first played, one of Daniel's wants is to WooHoo with Kaylynn. Mary-Sue will get a chance card at work, and either option, besides "ignore", will result in her being sent home early, possibly catching Daniel and Kaylynn in the act. 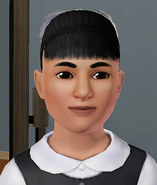 Kaylynn in Create a Sim

Kaylynn's outfits in The Sims 3