Kaylynn Curtin is one of the pre-made NPC repairmen who resides in Desiderata Valley, the neighborhood shipped with The Sims 2: FreeTime. The other two repairmen are John Gothier and Gretchen Miguel. She can be made playable by befriending and asking her to move in, or by marrying her. Kaylynn has medium-length grey hair, dark blue eyes and medium skin. She is a Popularity Sim with the Leo zodiac sign.

As far as personality, Kaylynn is extremely neat, quite outgoing, and a little bit active. But she is quite serious and grouchy. When it comes to Kaylynn's skill points, she has maximized the mechanical skill, is close to maximizing the charisma skill, and on her way towards maximizing the logic skill. While she doesn't have any major interests, she is interested in Environment, Health, Crime, Entertainment, and Work. Kaylynn has the same facial structure as Crystal Potts.

According to her SimDNA in SimPE, her hair was brown before it turned grey. Despite being a repairman, Kaylynn's head-shot reveals that she doesn't wear the stereotypical repairmen outfit before she is first spawned in-game. There are several other NPCs from Desiderata Valley who also have this quirk. Sometimes if she is made playable, her PlumbBob will be inside her, instead of above her head. This happens with several other NPCs in The Sims 2. Kaylynn's pre-destined hobby is Music and Dance. 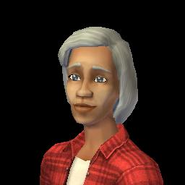 Kaylynn's appearance in-game.
Add an image to this gallery
Retrieved from "https://sims.fandom.com/wiki/Kaylynn_Curtin?oldid=823712"
Community content is available under CC-BY-SA unless otherwise noted.