The Sims Wiki
Register
Don't have an account?
Sign In
Advertisement
in: Sims, Female Sims, Young adults,
and 15 more
English

Katy Perry is a Sim based on the pop singer of the same name. She was made for promotional purposes. She came with no traits, hot pink hair, and an exclusive hairstyle that she wore on the Teenage Dream: The Complete Confection cover.

Katy Perry has been promoting the franchise several times: She appears singing her smash hit "Hot n Cold" in The Sims 2: Apartment Life's official trailer. In The Sims 3, the expansion pack Showtime has a Collector's Edition that includes her. As well, the stuff pack Katy Perry's Sweet Treats is a stuff pack inspired by her hairstyles and outfits from her music video "California Gurls", red carpets and some of her performances on stage. She also released promotional photos for the expansion packs The Sims 3: Supernatural (which includes a hairstyle that she wore in her video "Wide Awake") and The Sims 3: Seasons (which includes a pin-up hairstyle that she wore on her California Dreams Tour).

Katy Perry was once available for download on The Exchange, but at uncertain point of the time, she was taken down.

This character was made for promotional purposes and does not exist in the retail game.

Katy Perry Sim as a zombie dancing the Smustle 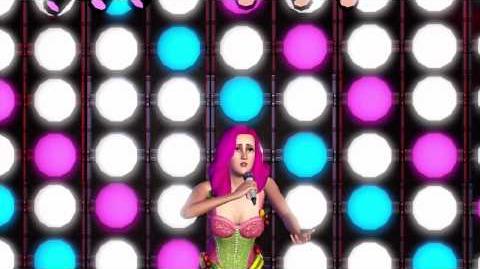