The Sims Wiki
Register
Don't have an account?
Sign In
Advertisement
in: Sims, Female Sims, Adults,
and 21 more
English

For the mother of the Caliente sisters in The Sims 2, see Nighat Caliente.

Katrina Caliente is a pre-made Sim who resides in Oasis Springs, the neighborhood shipped with The Sims 4. She is the mother of the Caliente sisters in the alternate universe and shares a house with both of her daughters and Don Lothario. Although the household description suggests that Katrina and Don are romantically involved, they are actually just acquaintances when first played. She is friends with both of her daughters.

Katrina is an adult, 24 days away from becoming an elder. She works at level 4 (opening act) of the entertainment career and has the Soulmate aspiration. She has two skill points each in comedy, fitness, and piano. She has red hair, green eyes, tan skin and wears a grey cardigan along with a turquoise top and shorts. Her name was probably chosen because it rhymes with the names of both of her daughters. Some players also believe that Katrina and Nighat could be the same Sim as they are both mothers to Nina and Dina. However it is unknown whether this is the case.

While The Sims 4 is set in an alternate timeline, Katrina is the only Sim to date whose existence is actually contradicted in the original timeline, since she replaces Flamenco Caliente and Nighat Caliente as Dina and Nina's known parent(s). 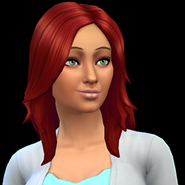