The Kat family is a premade family that can be found in The Sims: Unleashed and in the occupied Lots and Houses bin that came with the The Sims 2: Pets. The Kat family, like its name, is attached to the feline species. Ginia Kat is an (apparent) elder[1] who lives alone in The Sims: Unleashed. She is kept company by her cats Waggles, Boots, Scout, and Maggie. Her daughter (?), Tara Kat , is not featured in the first game, but is found in the second game, also lives alone and is kept company by cats. Her cats include the adult cats Mickey and Samantha, who were left to her by her mother, which means that they were born when Ginia was still alive. Once her lot is placed, it starts off with her adopting a new kitten, Faline , and worrying how her other two cats will react. 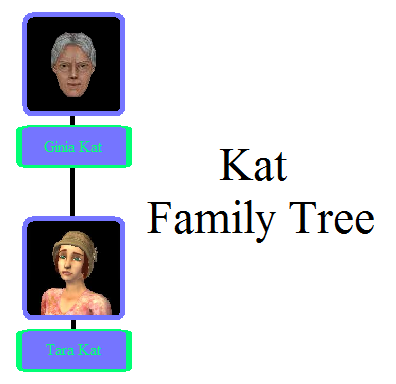 Retrieved from "https://sims.fandom.com/wiki/Kat_family?oldid=594276"
Community content is available under CC-BY-SA unless otherwise noted.