June Kay is a Sim who appears in The Sims 4 base game. She is one of six characters in five households who are included in the Gallery that ships with the game. She appears in the Epic Wood trailer.

Not much is known about June other than her traits and aspiration. Like all Sims in the gallery, she is unemployed and has no skills.

June shares her appearance with one of the default characters in Create a Sim, and appears on the old front cover art for The Sims 4. Some of the renders and video clips in which she appears seem to hint at a possible romance between June and Steve Fogel. This was confirmed in the bios of the latest versions of the pair, uploaded by Maxis, which states that the couple is married. 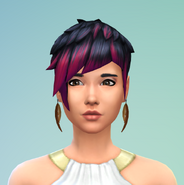 Retrieved from "https://sims.fandom.com/wiki/June_Kay?oldid=940778"
Community content is available under CC-BY-SA unless otherwise noted.